Organic by necessity could be a boon 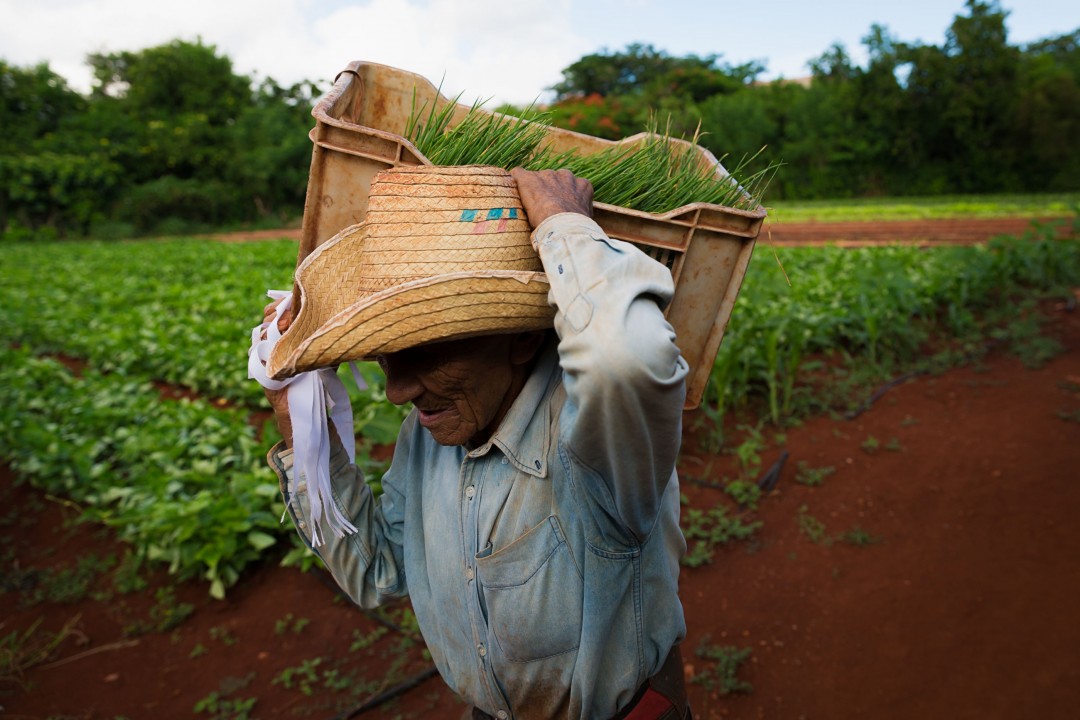 Without Soviet-supplied pesticides and chemicals, some farms grow the natural way

HAVANA — Organically grown lettuce, beans, rice, mushrooms, spices and even Santeria plants cover the reddish soil at the 25-acre urban grove of Vivero Alamar cooperative, on the outskirts of Havana.

The workers there say some salvia plants help repel insects. Plants are mixed up so they will attract different species of insects that will control each other. California worms work producing organic compost. Members of the cooperative pick the vegetables every day and bring them to a stand at the front of the fields where neighbors from Alamar can buy them. Lettuce can sell for 3 Cuban pesos per bundle — about 12 cents a pound — sweet potatoes for

2 pesos, or about 8 cents, a pound. If anything runs out, workers go to the grove and bring more.

Vivero Alamar is a model of organic urban agriculture in Cuba, a grove where its president, Miguel Ángel Salcines, said farmers put academic research into practice and get high yields.

“There is some appreciation that this is a bit dreamy, that it is a utopia,” he said. “There is not such utopia. There’s no dream. It’s a reality.”

Organopónicos, as Cubans call organic groves set up in urban areas, were created out of necessity. After the Soviet Union fell, the flow of pesticides and chemical fertilizers to Cuba plummeted, as did the production of food. Organopónicos were one of the responses to increase food production.

But now many in Cuba — and some U.S. businesses — see a golden opportunity to export organic vegetables to the shelves of American supermarkets such as Trader Joe’s or Whole Foods. That money could help Cuba buy other needed imports, such as technology. But that can happen only if restrictions in the embargo are lifted.

Paul Johnson, vice chairman of the U.S. Agriculture Coalition for Cuba, an organization of agribusinesses and trade groups that lobbies to normalize commercial relations between the U.S., said there are some companies interested in importing country’s organic fruits and vegetables.

Johnson, who also owns a company that sells cereal and other food to Cuba, said the country is close, its farmers already have the organic know-how and the brand of Cuba will appeal to consumers.

“It’s a brand. It’s a name,” he said. “It’s something they are not used to. There’s a big appetite for things made in Cuba.”

The Vivero Alamar organopónico received about 10,000 to 13,000 American visitors in the last three years and delegations from 34 U.S. universities interested in organic agriculture, Salcines said. The farm’s production yield, he said, is about 61 tons per acre. Salcines said he sees a good opportunity to exchange knowledge with the U.S.

“This has become a pilot project,” Salcines said. “But it has become an example of what a small business that looks for financing abroad can  become.”

He said the lack of resources, though, is slowing them down. They lack everything from wheelbarrows and shovels to boots and hoses.

The cooperative sells 15 percent to 20 percent of its production to the tourism sector.

As Cuba looks to increase organic exports, one problem will be certifying the production as organic, he said. Vivero Alamar managers, for example, don’t know the origin of seeds the government provides. González said they are trying to design their own national certification process.

If the embargo is lifted, they would have training in certification processes, he said.

“We will be ready after, in case the blockade falls,” he said.

There are some crops they cannot produce organically though, said Juan José León, spokesman for the Cuban Agriculture Ministry. He said potatoes grown at sea level cannot resist insects without pesticides. Tobacco or oranges could be extremely hard to produce organically.

Salcines says there needs to be a transition, but believes that organic farming can replace farming with chemicals.

León said there are about 44,500 acres in urban organic agriculture in Cuba. And although many farmers are not organic, they can be considered alternative. Many farmers, he said, produce their compost themselves.

The farm in a countryside near Bejucal south of Havana where Yordan Justi works is organic, but only has about 21/2 acres. Justi, his wife and his stepfather work the land for a cooperative.

They sell the vegetables at the front of the farm from a stand that was built with what looks like concrete blocks, an asbestos roof and metal fence net. Jordan Justi works on an organic farm and produce stand, or organoponico, in Bejucal, south of Havana. (David Albers/Staff)

Justi, wearing a cap that reads “Miami”, stands in the afternoon heat inside the stand, behind a few bundles of green beans, okra, scallion, radish and some mangos. They weigh the produce for customers on an old scale. In a small board at the back of the stand, they write down prices they charge for vegetables, fixed by the cooperative. When they run out of produce to sell, they pick more.

The family gets 90 percent of what they sell and 10 percent goes to the cooperative Románico Cordero, he said.

The cooperative prohibits the use of pesticides or chemical fertilizers. It provides compost from the dairy farm, and lends a tractor or an ox when they need it.

Most of Justi’s clients come from Havana, about 20 miles away, commuters who pass by after work. It’s not as busy as Vivero Alamar’s stand, but Justi said he earns a nice living selling produce.

In a good month, he can earn as much as $40, about twice what a typical government worker earns.