Picking up the slack in chile cultivation 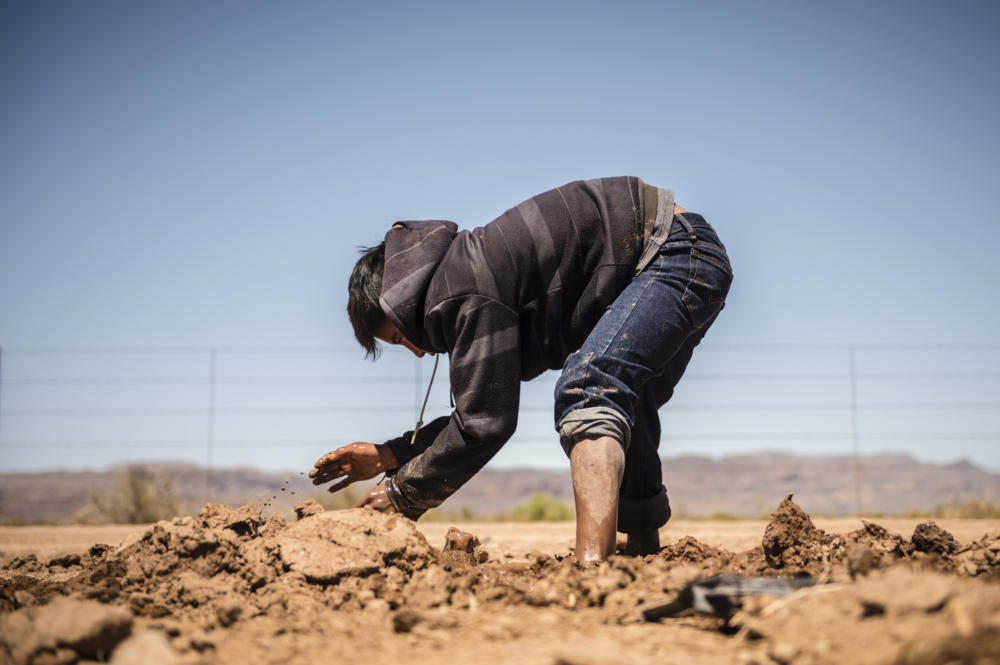 EL CAMELLO, Mexico – A dozen workers from southern Mexico, the youngest not quite a teenager, tip back glass bottles of ice-cold Coca-Cola in a plowed field just steps from the U.S. border.

They have been clearing rocks under a blazing sun for Mennonite farmer Pedro Suderman, earning about $1.35 an hour. They are barefoot and mostly family.

Like many farmers in northern Chihuahua who struggle to find workers locally but can still count on a steady supply of migrant labor from southern Mexico, Suderman has been growing more and more chile each year to send to New Mexico processors. 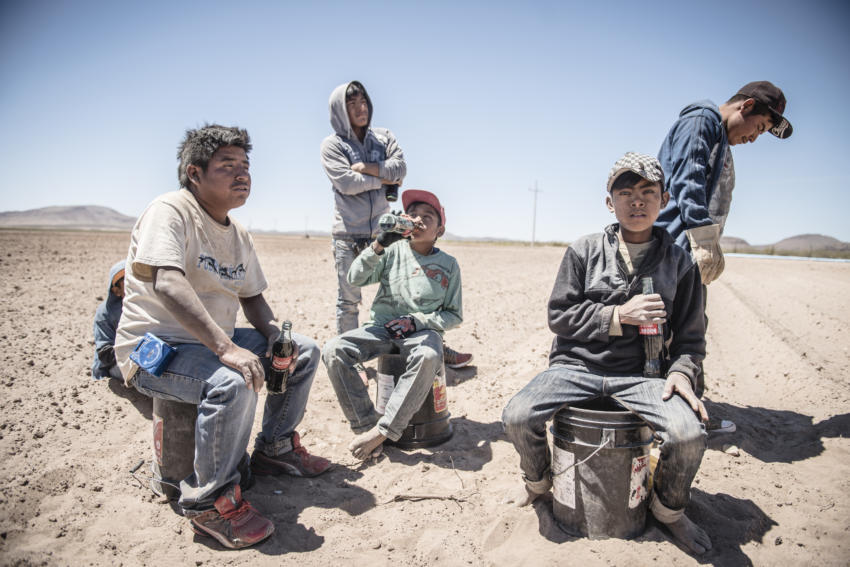 Workers from Guerrero state in southern Mexico take a break after clearing rocks from Mexican farmer Pedro Suderman’s fields just south of the U.S.-Mexico border. Migrant workers come from the south each year from planting to harvest, then return home for the winter. ( Roberto E. Rosales/Albuquerque Journal)

New Mexico’s chile acreage has shrunk by nearly half over the past 15 years, from a peak of 17,500 acres in 2005 to 9,200 acres last year, and total production has fallen as well. Mexican farmers have been picking up the slack. 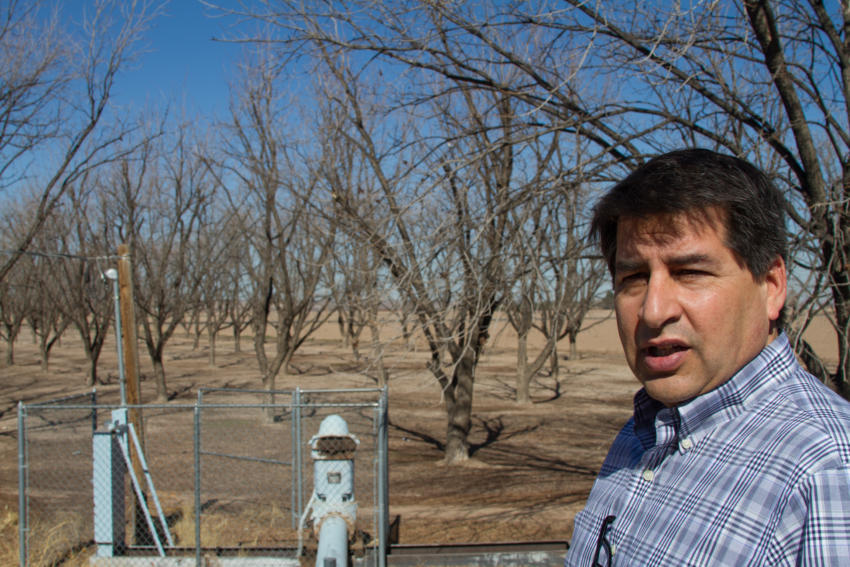 Chihuahua state alone is today planting roughly 90,000 acres of chile – an area equivalent to “every bit of agriculture south of Elephant Butte” in New Mexico, according to Dino Cervantes, head of chile producer Cervantes Enterprises Inc. in the Mesilla Valley.

Farmers in chile, pecans and onions south of the border “are going gangbusters,” Cervantes said, thanks to better access to migrant labor. “They only have access to labor through a similar process we used to do here: agriculture labor migrating from parts of the country to this area. The majority of the labor is coming from southern Mexico.” 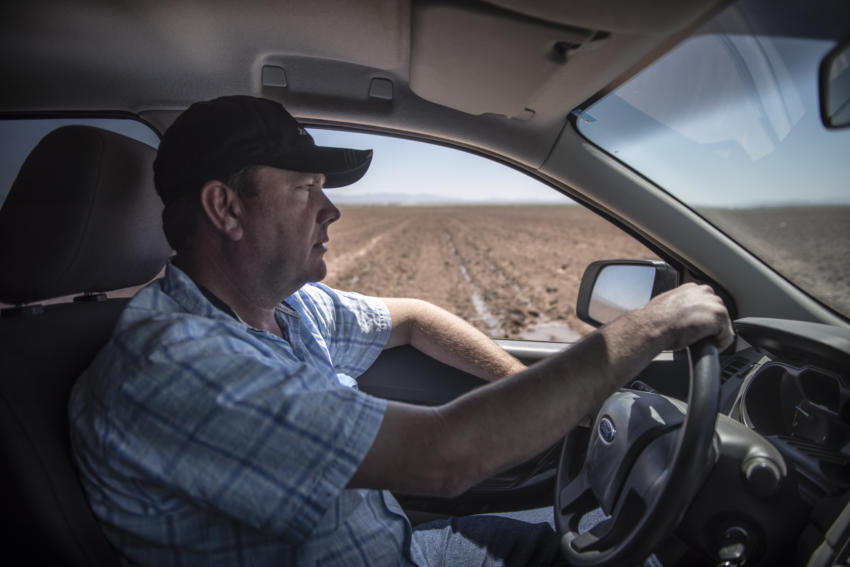 Mexican farmer Pedro Suderman(Cq) drives his diesel truck to monitor the progress on a drip irrigation system for his field in an area of northern Mexico called El Camello just east of Hidalgo county.Story on how both sides of the border use underground and water from the Rio Grande. (Roberto E. Rosales/Albuquerque Journal)

Tall, blond and blue-eyed, Suderman farms land that stretches along nine miles of the U.S.-Mexican border. He started with 25 acres of chile a decade ago and today grows nearly 500 acres, green and red. His fieldworkers come largely from rural, often deeply impoverished, indigenous communities in southern Mexico.

“In chile season, I get people from Oaxaca who specialize in chile,” he said.

The Mennonite community at El Camello might have 300 workers on site during the harvest, he said. 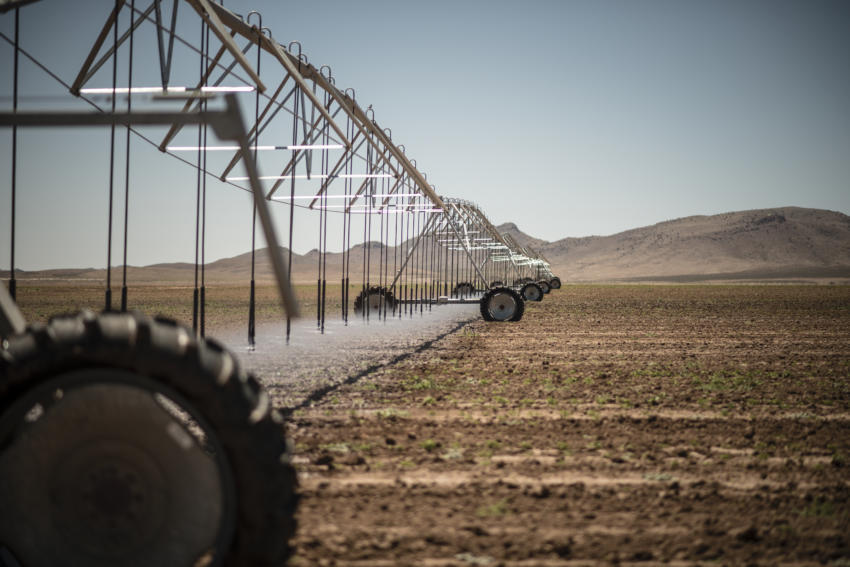 New Mexico farmers depended for decades on a supply of cyclical labor from Mexico, legal or illegal, to harvest green chile, whose life cycle and fragility have made it uneconomical to harvest by machine.

In the 1980s and 1990s, when crossing the border illegally was as simple as walking between Anapra and Sunland Park, or paying 50 cents to be ferried over the Rio Grande in El Paso – practices largely tolerated by U.S. authorities until border security intensified after 9/11 – migrant labor came and went from Mexican ranchos to the fields of New Mexico and back again. 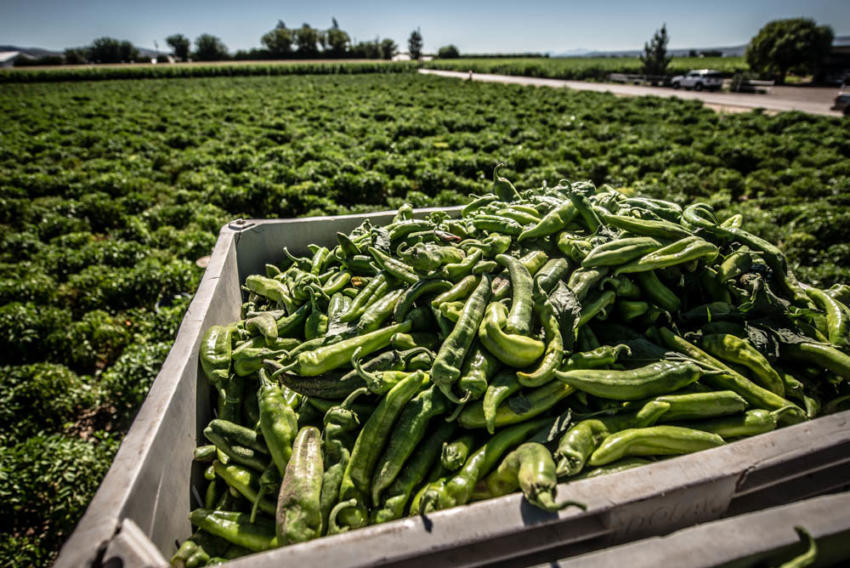 Freshly picked chile is loaded into a truck for transportation from a field in New Mexico’s Hatch Valley. New Mexico’s chile acreage has shrunk by nearly half over the past 15 years. (Roberto E. Rosales/Albuquerque Journal)

Nationwide in the U.S., meanwhile, demand for Hatch chile has only grown. And while production per acre is way up from the 1980s – from fewer than 10 tons an acre to more than 20 tons, according to the New Mexico Department of Agriculture – total production has decreased. 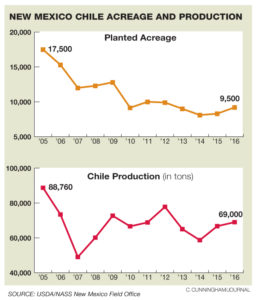 In its spring survey, the USDA reported that fieldworkers were earning an average of $12.22 an hour; pickers in New Mexico are guaranteed the state minimum wage of $7.50 an hour.

“It’s labor; that’s what it boils down to,” said David Lucero, marketing division director for the state Department of Agriculture. “I think they have addressed some of their water issues with efficiencies in drip irrigation. But let’s face it: When you look at the average age of the average fieldworker, it’s getting up there.”

That Suderman must recruit workers from afar may be a sign of labor issues to come, Lucero said.

Mexico’s birthrate has plummeted. In the 1960s, Mexican women had an average of seven children. Today it’s just more than two children apiece, slightly ahead of the U.S. rate.

The sharp drop in illegal immigration of Mexicans to the U.S. over the past decade – apprehensions by Border Patrol topped 1.6 million in 2000 and fewer than 200,000 last year – isn’t only about border security. It’s about demographics. There simply aren’t as many young people in Mexico looking for jobs.

Alfredo Mateo, a 45-year-old farmworker wearing an NBA jersey and a ball cap embroidered with “New York,” organizes Suderman’s migrant labor pool from his pueblo on the Costa Chica of Guerrero state in southern Mexico. He and the other workers speak Spanish and their native tongue, Mixteco. His homeland, he says, is fertile for growing chile, beans and peanuts – but there is nowhere to sell anything and no jobs.

He doesn’t mention it, but the mountains of Guerrero where he comes from are also fertile for another crop: the poppy that produces opium, which drug gangs process into heroin to market in the U.S. Acapulco, the biggest city in the region, is six hours away and plagued by drug violence.

“In 2005 I started coming here,” he said. “I built a house back home. I got a loan, and the people told me that up in Chihuahua there was work, if you want you could earn money to pay what you owe. And I said, yes! I came right away and I earned money to pay my debts. So then I started coming, and coming. Until now.”

The barbed-wire border fence that divides the U.S. and Mexico was just steps from where Mateo and his workers were taking their midday break.

Had he thought about crossing over, to where wages could be more than 10 times higher?

“No, I don’t think about that,” he said. “My nephew, actually a lot of my family, is there in Santa Maria, Calif. I think they work in strawberries. But I came here, that’s it.”

“People say that it is very hard to cross (the border),” he said. “So when people go, they go for years to earn money there so they can buy land back home, build a house, put in a backyard. That’s what we’re doing. All of us from Guerrero, Oaxaca, we are all out there struggling, seeing what we can do to survive.”

He and his band of workers come in April for planting and stay through the harvest season, living in dormitories and returning home in December before coming back again in the spring.

Along Mexico’s Highway 2 to Janos, on down Highway 10 to Nuevo Casas Grandes, the desert gives way to lush fields where onion tops stand up, chile plants sprout and orchards of pecan trees form a sprawling canopy of green. Agriculture, anchored by the availability of seasonal labor, buoys local economies. 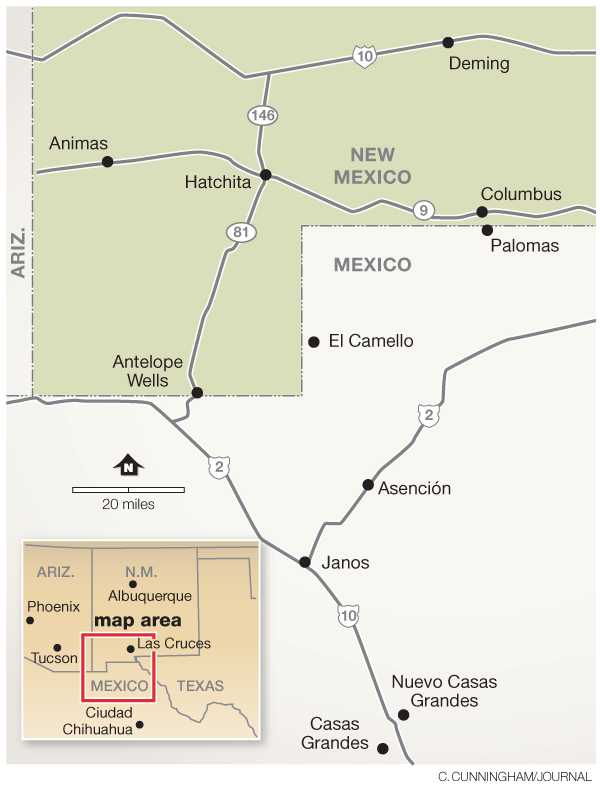 With a combined population of about 75,000, Nuevo Casas Grandes and its sister pueblo, Casas Grandes, support a bustling thoroughfare of restaurants, bars, boutiques and five new-car dealerships. The region was once a draw for tourists from New Mexico and Texas, but a spate of drug violence in the region mostly scared off the Americans, and the towns depend more than ever on in-country tourism and agriculture. 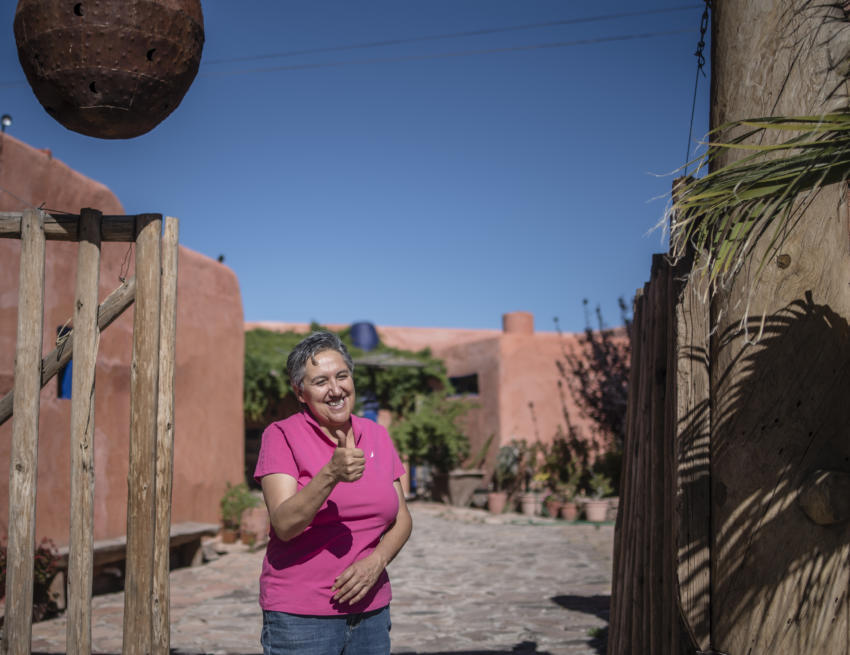 Mayté Luján runs a bed-and-breakfast in Casas Grandes called Las Guacamayas and a gallery of fine local pottery. Her brother grows chile and pecans, she says – more each year – and he recruits migrant labor from the south as well.

“Chile has boosted the economy, but we don’t have the labor here,” she said. “They come from Oaxaca, Guerrero. They earn good money, very good,” compared with where they come from.

With border security as tight as it is, with the anti- immigration rhetoric as sharp as it has been, the American dream has faded for many Mexicans, she said. Working in Chihuahua, people from southern states plant and pick crops, save their money and go home in the winter to rest until the spring.

“Here they don’t have to risk their lives,” she said. “Here they aren’t discriminated against.”

“This is the new Mexican dream,” she said.