Unlike the surface water of the Rio Grande, which is governed by a 1906 treaty, there are no agreements governing binational use of aquifers that straddle the U.S.-Mexico border. When Ciudad Juárez started drinking from the Mesilla Bolson, the effects were felt on the New Mexico side. This is the second in a five-part series. The first installment was published on June 25.

SAN JERÓNIMO, Mexico – Manuel Herrera shouts over the roar of pumps lifting thousands of gallons of water per minute out of a binational aquifer shared with New Mexico.

“This is the biggest pump station we have in the city,” says the technical director of the Ciudad Juárez water utility, showing off a plant that feeds water from the Mesilla Bolson to the sprawling Mexican border city.

Short on cash and faced with worsening water quality in the main aquifer Ciudad Juárez shares with El Paso, the city looked west for water. Mexican billionaire Carlos Slim’s Grupo Carso won a contract to pump and pipe water from south of New Mexico across 15 miles of desert to the Mexican metropolis.

“In the binational competition for resources, it would seem that the objective in the borderland, as was the case in the Old West, is that the biggest gun wins the duel,” said Alfredo Granados-Olivas, a senior water researcher at the Autonomous University of Ciudad Juárez.

Both sides are pumping groundwater intensively, he said, and the governing principle is that whoever pumps the fastest gets the water. 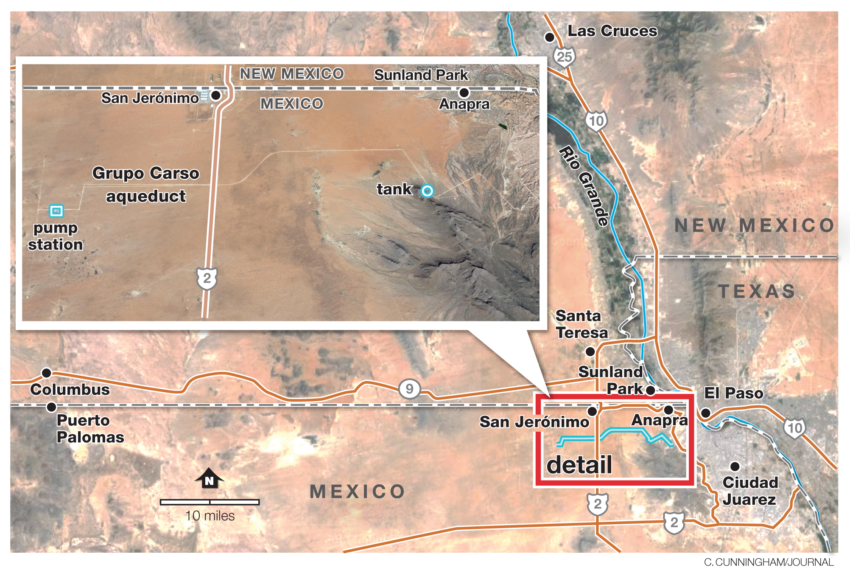 The Santa Teresa industrial hub, the cities of Sunland Park and Las Cruces and valley farmers all depend on the Mesilla Bolson. It’s called the Conejos Medanos on the Mexican side, but it’s essentially a connected underground supply.

The quality of Conejos Medanos water delivered to Ciudad Juárez homes doesn’t meet U.S. standards for drinking water – and appears to fall short of lesser Mexican standards in arsenic – and could be a harbinger for Santa Teresa developers looking to build residential, commercial and industrial property at the border.

Hydrogeologist John Hawley, who has studied the binational aquifer for decades, warns that what the Mexican side is seeing today, the U.S. side could see soon enough.

“They probably have really good quality water at the top, and at the base of the wells they are pulling in stuff that is mildly brackish,” he said.

The Conejos Medanos field’s 23 working wells have been drawing down the aquifer at a rate of about three feet per year, according to Carso engineer José Juan Delgado Fernández.

“To put it in perspective, (the Conejos Medanos well field) supplies 12 percent of the water that Juárez needs,” said Oscar Ibáñez, a water engineer at the Universidad Autónoma de Ciudad Juárez.

Herrera says, “We’re using less water than what we had expected. We’re always looking toward the future, seeing what reaction the aquifer would have. It was a new source for us that we had to be analyzing, the quantity as well as the quality. We are reviewing the quality and the behavior of the aquifer drawdown.”

It may have been less than expected, but it was enough to raise eyebrows in New Mexico.

Riding through broken and busy streets in Ciudad Juárez, Herrera sees what is invisible to the uninitiated: the historic trajectory of water before the city was a city. Where arroyos once channeled water, streets downtown flood in rainstorms. He points to where old canals used to move Rio Grande water to cultivated fields, now paved over.

The urban footprint of Ciudad Juárez doubled every decade between the 1950s and 1980s, then swelled again by half its size each decade through 2000, slowed only by a spate of drug-related violence and the global recession in the late 2000s.

As it grew, the behemoth border city – with an industrial economy driven by NAFTA – crawled east to gobble up farmland, south into the Chihuahuan desert and west along the New Mexico state line.

Its population grew to 1.4 million. And the city got thirsty.

The water authority, known by its acronym JMAS, knew there was water in the Conejos Medanos but didn’t have the funds to tap the aquifer, Herrera said. It put the contract out to bid and Carso won.

“It was a pioneer project where a government and private industry worked together in a public works project,” said Keith Boone, who owns land west of Ciudad Juárez at the border on the Mexican side. “This is one of the first projects where Carso did all the infrastructure, financed it, and they are getting paid a monthly fee for every liter that goes through it.”

Boone calls it “a wonderful project.”

The 2007 construction contract was worth nearly $23 million at the time, according to Grupo Carso’s 2009 annual report. Carso completed the build-out that year and began in 2010 the operation and maintenance portion of the contract – valued at $85.2 million.

Dr. Raul Pacheco-Vega, professor of water governance and public policy at Mexico City’s Center for Investigation and Economic Research, called the contract “another example of regulatory capture by private companies.”

“The gains from private suppliers providing public goods are really overrated,” he said.

Herrera says the city is expected to take control of the pump station and pipeline in 2020 when the contract is up.

The Carso lift station sits in the middle of the San Jerónimo desert, about three miles south of the Foxconn campus, where the Taiwanese electronics manufacturer makes Dell computers to ship stateside. Foxconn has its own pair of wells on the aquifer; the Carso plant runs water exclusively to Ciudad Juárez.

The pipeline runs east through the orange-dune desert that may one day be filled with factories and houses. It reaches a tank in the hills that ring the city, where water rushes audibly down into bustling west side neighborhoods – excluding Anapra.

Herrera says the water is “totally potable,” but the NMSU study of water samples taken from west side Ciudad Juárez homes showed levels of arsenic and sodium that didn’t meet Mexico’s Rule No. 127 standards for drinking water.

Herrera says the city tests the Conejos Medanos water every six months and has consistently found the water meets Mexican standards. He was provided a copy of NMSU’s results but didn’t respond to a request for further comment.

On the U.S. side, nearby Santa Teresa and Sunland Park struggled with elevated arsenic levels for years before a new treatment plant came online in February. Arsenic is an odorless, tasteless poison that can cause vomiting, abdominal pain and diarrhea and, in the long term, heart disease or cancer.

Residents of west side neighborhoods in Ciudad Juárez describe the water as tasting “strange,” “like dirt” or a “little weird.”

Antonia Bañuelos sat on the sidewalk in front of her pastel-green house with a plywood roof. Like other residents of the neighborhoods served by the Carso pipeline, she said she won’t drink the water but she will cook with it.

“There is always water, except when it’s really hot,” she said. “The quality isn’t good. It hurts my stomach, and it has a very odd taste.”

Omar Crespo does a brisk business selling five-gallon jugs of purified water from the back of his truck. They go for 13 pesos apiece, or less than $1. He says he has been selling water this way for 10 years and sales are up.

“Almost everyone only drinks purified water,” he said.