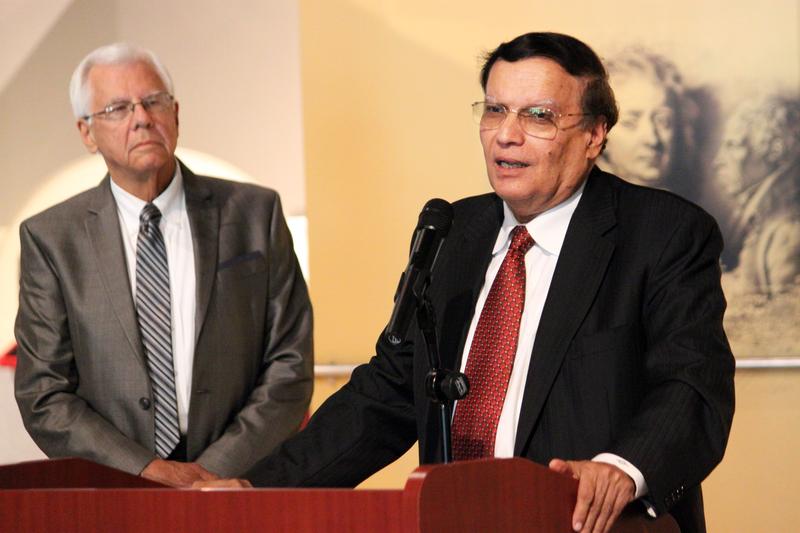 This article was produced in partnership with WNYC, which is a member of the ProPublica Local Reporting Network.

New Jersey state officials have placed a hold on a $260 million tax break for Holtec International, a nuclear company that built its new headquarters on the Camden waterfront, while investigators examine details of its application, according to two state officials with knowledge of the investigation.

Officials took the action after a report last month from WNYC and ProPublica about an inaccuracy in a sworn certification submitted by Holtec CEO Kris Singh as part of the company’s application. In 2014, the New Jersey Economic Development Authority granted Holtec the second-largest tax break in state history to help the company bring new jobs to the city.

The company collected its first installment, a $26 million tax credit, after moving into its new headquarters in 2017. It would have been eligible for a $26 million credit every year thereafter for nine years. The status of the 2018 credit is not clear. The decision to freeze the credits is the first corrective action by the EDA that has become public since Gov. Phil Murphy started criticizing the program in January.

Holtec is one of a number of companies aligned with South Jersey Democratic boss George E. Norcross III, who serves on its board of directors. Companies linked to Norcross and the law firm of his brother Philip received at least $1.1 billion worth of tax breaks, according to a review by WNYC-ProPublica.

Holtec did not respond to a request for comment. After WNYC and ProPublica contacted Holtec about the incorrect information on the application, a lawyer representing Holtec wrote to the EDA, calling the misstatement an “inadvertent mistake” that the company would like to correct. The letter was sent by Kevin Sheehan, an attorney at the law firm Parker McCay, where Philip Norcross is managing partner.

In the sworn statement required for the tax break application, Singh said the company had never been barred from doing business with a state or federal agency, but in 2010, the Tennessee Valley Authority suspended the company for two months and fined it $2 million after a federal investigation found the company had paid a TVA employee $54,212. The employee pleaded guilty to a federal charge of failing to report the payment on a financial disclosure form. Holtec restored its relationship with the TVA and continues to hold contracts with the agency.

Sheehan handled the applications for many of the companies that received tax breaks to move to Camden. Emails obtained under a public records request show that Sheehan and Philip Norcross were involved in rewriting the tax break laws in 2013 that gave special advantages to companies that moved to the city.

George Norcross’ insurance company received a tax break to move from the suburbs of Camden into the city. Norcross also sits on the board of Cooper Health System, a nonprofit hospital that received a $39.9 million tax break in 2014.

The New Jersey tax break program is under investigation by the state attorney general and a task force appointed by Murphy. Norcross has hired a phalanx of high-powered attorneys who have filed a lawsuit challenging the task force’s authority.

Politico reported this week that the EDA, which administers the program, has received a state grand jury subpoena to provide information about several tax breaks awarded to companies with ties to George Norcross, including his insurance company, Holtec and Cooper Health System, where Philip Norcross also serves on the board.

The tax break for Cooper Health System came under review by the task force during a public hearing in May, when questions were raised about whether the hospital had threatened to move some employees out of state in order to qualify for a larger tax break.

The hospital said it never made such a threat. “Neither the EDA nor the Task Force has provided any document whereby Cooper certified that its jobs were at risk of leaving New Jersey,” Thomas Rubino, senior vice president for communications, said in an email to WNYC and ProPublica.

The hospital originally applied for a tax break for office workers to move from the Camden suburbs into the city, where the hospital is located. But in the days before its approval, the EDA asked to see the hospital’s out-of-state lease offer, according to emails.

“I am touring alternative locations in Pa. on Wednesday and hope to have term sheets by the end of the week,” wrote Andrew Bush, Cooper Hospital’s vice president for real estate and facilities. A lease for office space in Philadelphia was later provided to the EDA, and the hospital’s tax break was approved four days later.

The EDA staff provided a memo to its board recommending approval, noting that the hospital would otherwise move the jobs to Philadelphia. “The emails related to out-of-state locations were initiated by the EDA, not Cooper,” Rubiono wrote. “Cooper did not initiate discussions of alternate locations, nor did it certify it planned to move any jobs out of state. Cooper merely complied with the EDA request for comparable location data.”

Two weeks ago, George Norcross, Cooper University Health Care and Parker McCay filed a lawsuit against Murphy and the task force. The complaint, filed in Mercer County Superior Court, argues that George Norcross and his related companies, as well as Parker McCay, have been falsely and publicly accused of misconduct regarding the tax incentives.

The complaint also argues that the governor does not have the authority to investigate the EDA and that task force members are not licensed to practice law in New Jersey.

“Governor Murphy unlawfully empowered the Task Force with powers he did not possess and authorized the retention and payment of New York lawyers who proceeded to commence and conduct an investigation in violation of multiple provisions of New Jersey law,” the complaint says.

The task force plans to release its initial findings and recommendations at its third public hearing on June 11.