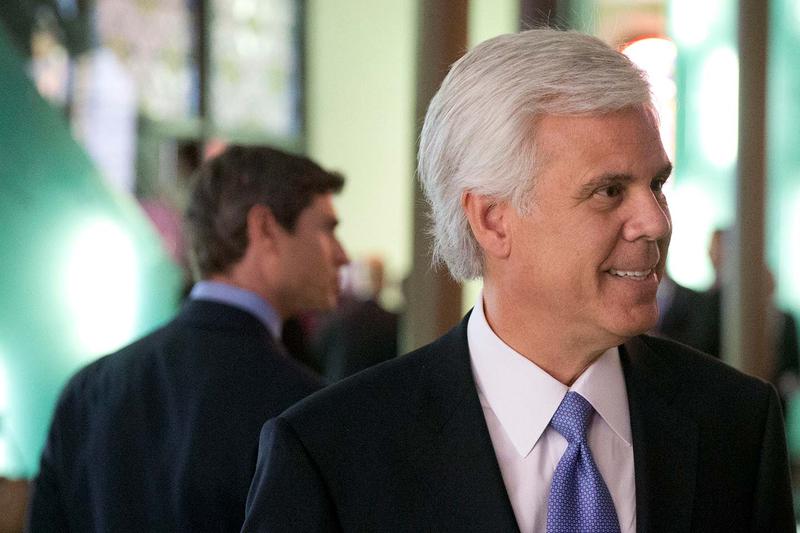 The report included new evidence of the influence of Democratic Party boss George E. Norcross III in steering tax breaks to favored businesses and nonprofits located along the Camden waterfront. The task force was formed by Democratic Gov. Phil Murphy in January to investigate the program.

It said that a Camden hospital system for which Norcross served as board chairman sought to mislead the state in its application for $39.9 million in tax breaks.

In a November 2014 email included in the report, a Cooper Health executive acknowledged that the hospital did not intend to leave New Jersey but was “quietly” seeking a lease quote for office space in Philadelphia to satisfy the tax break program’s legal requirements.

The email from Cooper vice president Andrew Bush to a realty firm in the Philadelphia area suggested that the hospital had decided to move its administrative offices to Camden but needed a quote on a cheaper space across the river to qualify for the breaks.

“I need a credible location that is LESS expensive than [Camden],” Bush wrote. “I need a full service number of $24 per square foot or less to make the numbers work.”

He added: “Quietly? No probability of us moving” to Philadelphia.

The preliminary task force report found that Cooper’s misleading claim about a competing site in Pennsylvania boosted its tax break from about $7 million to $39.9 million. That is because firms claiming to keep at-risk jobs from leaving New Jersey receive higher  awards breaks under the state’s “net benefit” formula for tax breaks.

Thomas Rubino, a spokesman for Cooper, said he had not yet read the report and declined to answer questions.

The report was released just minutes after Mercer County Judge Mary Jacobson rebuffed an effort by Norcross to block its release. Norcross and some of his business partners contend in a lawsuit that the task force is a political tool created by Murphy to gain leverage inside the state’s fractious Democratic Party.

In an hour-long oration from the bench, the judge cited audits going back to 2017 that found the tax break program was mismanaged and susceptible to fraud.

“The public interest is that the task force be allowed to report,” Jacobson concluded.

Dan Fee, a spokesman for Norcross, said in a statement: “Today’s decision by Judge Jacobson is disappointing but does not represent the end of this process. We will continue this litigation in an aggressive manner to protect our rights.”

In its report, the task force found that special interests helped craft the 2013 tax break law to benefit a select group of companies, and that the state was ill-equipped to vet and monitor tax break applicants.

The law “was structured to favor certain parties while disfavoring others,” according to the 79-page report. The tax break law also gave unique advantage to Camden applicants, the report found.

The task force has made several criminal referrals to unspecified law enforcement agencies, and a state grand jury is looking into the program, which is administered by the New Jersey Economic Development Authority.

In May, the task force conducted a hearing on tax breaks that focused on Cooper Health and other Camden firms connected to Norcross. An insurance firm owned by Norcross received an $86 million tax break in 2017 for its part in building a luxury office tower.

The report said that Norcross’ insurance company and his two business partners publicly announced that they would move  to Camden a year before they applied for the breaks, offering lease proposals for competing locations out of state.

“This meant that their certifications in their applications that jobs were ‘at risk’ of leaving New Jersey were, at best, dubious,” the report said.

The report also said that the $86 million tax break for Norcross’ insurance company, Conner Strong & Buckelew, would have been much smaller without language added to the tax law by Parker McCay, the South Jersey law firm headed by his brother Philip Norcross.

“An award of that size would have likely been impossible if not for statutory amendments that Parker McCay played a pivotal role in incorporating into the legislative design,” according to the report.

Since the program came under scrutiny, every company receiving a New Jersey tax break has been asked to go through recertification, and some companies have volunteered to terminate their awards. Other recipients, according to the report, have been referred to either the Treasury Department, the EDA or law enforcement.

The state is reviewing a large award to Holtec International, a Camden nuclear firm, after WNYC and ProPublica discovered a misleading sworn statement in its application form. The company said the mistake was inadvertent.

So far, more than $500 million worth of tax breaks have been terminated, either voluntarily or through legal action.

Update: Following publication of this story, a spokesman for Cooper Health System said the report from the governor’s task force shows his organization never intended to move out of state and was merely complying with a request from the EDA for comparable costs. “The Task Force’s report is as expected — a biased, one-sided report with inaccurate assumptions, verifiably incorrect legal arguments, and misleading insinuations to support predetermined conclusions,” said the spokesman, Thomas Rubino, vice-president for communications.

In addition, George Norcross released a letter to a legislative committee that is also investigating the tax break program, asking to be given an opportunity to testify. “The decision last evening by Judge Jacobson to allow the task force to continue its operations despite noting the unfairness to my firm and the other plaintiffs is disappointing. But her decision does not represent the end of this process. We will continue our litigation in an aggressive manner to protect our rights. We will move quickly to schedule discovery and depositions.”