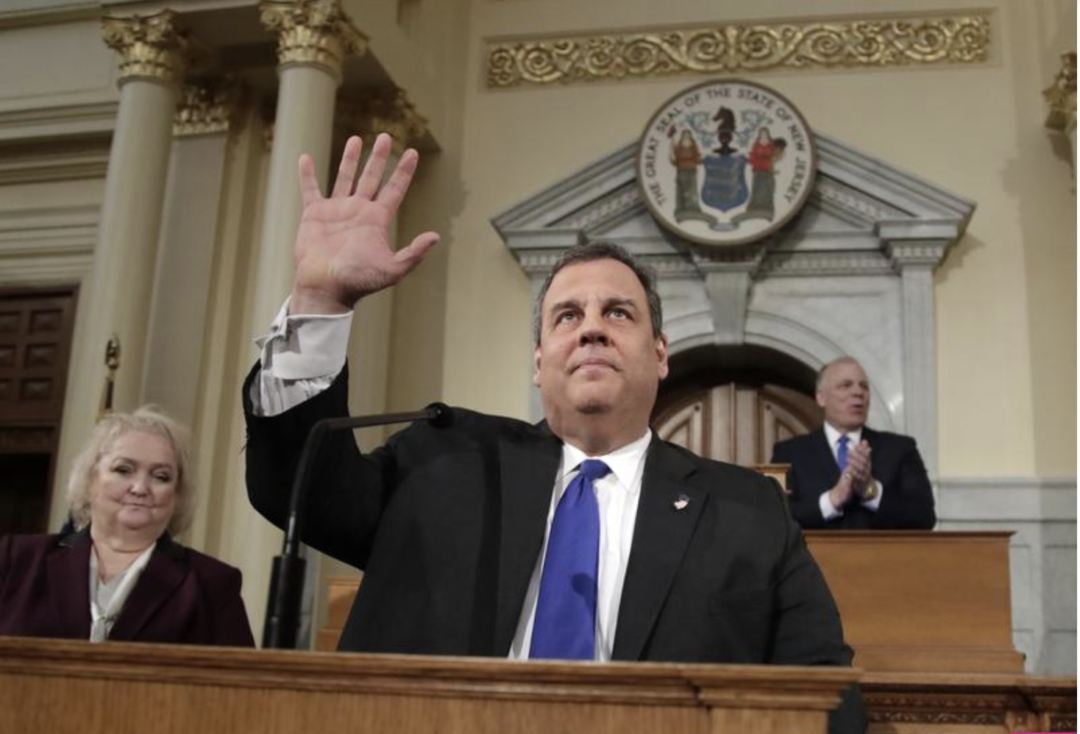 In his final address to the state legislature, Gov. Chris Christie touted the state’s tax incentives as an engine for creating jobs. ( Julio Cortez / Associated Press )

“I will tell you that early on I think the members of the Business Action Center wanted to take me out back and, you know, physically harm me,” Rosenfeld said in a sworn deposition in a little-noticed whistle-blower lawsuit filed by an EDA staffer.

“They’ll say we have to do this, that or the other thing.  I’ll say no we don’t,” said Rosenfeld, according to a transcript of the deposition obtained by WNYC. ”Our job is to assess whether [applicants] fulfill the eligibility requirements.”

The suit provides a window into a program that Gov. Murphy has criticized as  “an $11 billion black hole” created by backroom political deals. State auditors say the program is so deficient that it is impossible to verify if companies that got subsidies met the overarching goal to create new jobs.

The issue has driven a wedge between the governor and South Jersey Democrats who received special benefits from the program.

State investigators are now looking into the program, and a special  panel appointed by Murphy will soon begin public hearings that promise to add fuel to the debate.

The 2015 lawsuit was filed by Veyis “David” Sucsuz, a former staffer who worked at the EDA for 13 years. Michael Conlan, his lawyer, said Sucsuz has no further comment on the program.

In the lawsuit, Sucsuz claimed  he was fired for resisting orders to okay tax break applications that should have been rejected. A Mercer County jury rejected his claim,  finding that Sucsuz failed to provide enough evidence that he was fired because of his complaints about irregularities.

The suit says the problems escalated after the state pumped up the program in 2013, lowering qualifications and increasing benefits.

The Rosenfeld deposition describes an awards process in which the governor’s business office was more concerned with approving applications than following the rules.

Sucsuz, a finance officer who did the initial review of applications, said his bosses — including Rosenfeld — openly manipulated the process, often approving applicants who were ineligible.

The EDA had no comment on the substance of Sucsuz’s claims. The agency said only that the case was adjudicated in its favor. Rosenfeld, who still works at the agency and did not respond to an interview request, denied manipulating the applications improperly. Guadagno, in an email to WNYC, said she had no knowledge of the suit or any of the underlying facts relayed to her by WNYC.

In his deposition, which spans some 300 pages, Rosenfeld said his small staff processed a flood of applications in 2014, after the passage of new legislation to expand the program.

At the time, he said, there were only two or three staffers to screen “a massive” number of applications that can run past 100 pages each. Staffers had to make complex decisions about special bonuses that can increase the benefits even more.

The staff, as described by Rosenfeld,  often had to make tough decisions about an applicant’s eligibility, about the truthfulness of their financial data or about their claim to have a better offer from another state.

Rosenfeld said the staff did its best, but often had to rely on the word of the applicant and their hired lobbyists.

The governor’s office, too,  was often pushing on the side of the applicant , he said, and in the early days, was more concerned with generating tax breaks than following guidelines about who was allowed to get them.

“I think back in the day they were probably less concerned with the rules and regulations,”  he said in the deposition, which took place in October, 2017. “I think now they’re in a much much better place.”

Sucsuz, in his 2015 complaint, claims he was ordered to change spreadsheet data so it would look cheaper for applicants to do business out of state. That made them more eligible for tax breaks as an incentive to stay in New Jersey.

Sucsuz also said he identified applications that included non-existent  “phantom locations” out of state, where companies said they would move if they did not get New Jersey subsidies. But, he said, the applications were approved anyway.

Some problems arose even before the program expanded. In 2012, according to Rosenfeld’s deposition, Sucsuz complained directly to the Attorney General’s office about an application for $7.9 million in tax breaks from Memorial Sloan Kettering in Monmouth County.

Memorial Sloan was legally barred from getting tax breaks because it is a non-profit and exempt from corporate taxes. The Attorney General’s office agreed with Sucsuz, the deposition says,  and told the EDA that Sloan Kettering did not qualify for tax breaks.

Rosenfeld, in  the court papers, said that the agency then notified Memorial Sloan representatives that they did not qualify. Memorial Sloan then re-submitted the application as a limited liability corporation, through an entity named MSKCC LLC.  In his deposition, Rosenfeld said the rules allow a limited liability corporation to be eligible for tax breaks even though it is owned by a non-profit.

The EDA staff approved Memorial Sloan’s new application and the agency board approved the tax break in a 13-0 vote. Sucsuz, in the lawsuit, claimed that the staff never informed the board about Memorial Sloan’s non-profit status.

A spokeswoman for Memorial Sloan said the company was looking into the matter.

Sucsuz claimed that higher ups at the EDA — including former director Michele Brown, a longtime member of Christie’s inner circle — knew about his complaints but did nothing. In her own deposition, Brown denied anything improper.  She could not be reached for further comment.

This story was reported with support from the McGraw Fellowship for Business Journalism at the Craig Newmark Graduate School of Journalism, City University of New York.

Sucsuz Motion by on Scribd

An investigative journalist based in Trenton, New Jersey, Pillets will team with WNYC, New York’s public radio station, and ProPublica to examine powerful political machines in New Jersey. The work builds on Jeff’s twenty years of experience covering state government and pay-to-play issues for The Record of Bergen County. In 2008, Pillets was named a Pulitzer Prize finalist for revealing financial abuses that led to the collapse of a $1 billion brownfield project in the New Jersey Meadowlands.
<