Norcross Companies in the Crosshairs 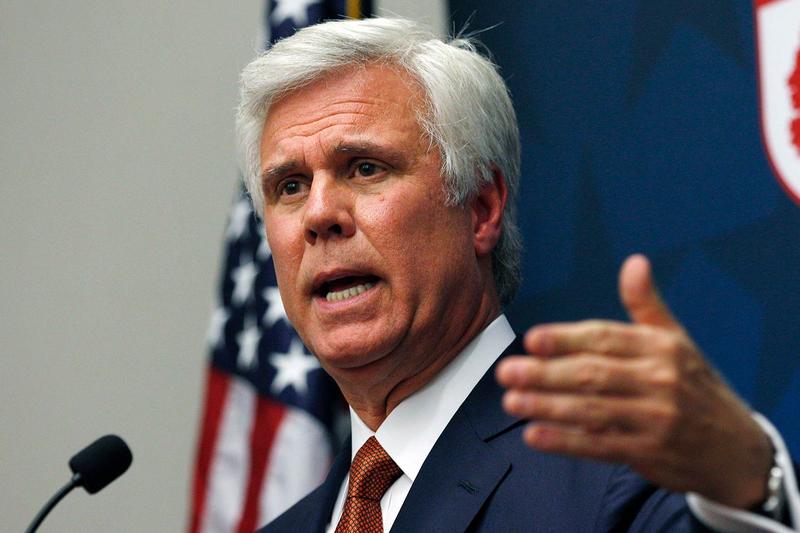 Investigators in a special task force, named in January by Gov. Phil Murphy, zeroed in on tax-break applications submitted by Norcross-related companies in Camden, including his own insurance brokerage firm and a non-profit hospital system where he is board chairman.

At issue, they said: Claims made by the companies that they would leave New Jersey if they did not get millions in tax grants from the Economic Development Authority, the state agency under fire for how it handled the tax break program.

The task force raised questions, for example, about the viability of competing offers made by landlords of office towers in Philadelphia. In some applications, letters of intent detailing offers had expired before applications were even submitted to the state.

In a statement, Norcross, a Democrat like Murphy, blamed that on the government.

“No private landlords would ever agree to hold open an offer for as long as government decides to take to review an application,” said the statement, from a spokesman. “As these quotes were not needed for the program’s eligibility, there was no reason to continue to seek updated quotes.”

Investigators also presented email evidence that officials at the non-profit, Cooper Health System, were enthusiastic about possibly moving to a Camden building, where it eventually moved, months before threatening to move to Philadelphia.

Cooper Health, which was approved for a $39.9 million tax break in 2014, has thus far collected more than $13 million in tax credits, investigators said.

“There is a real criminal exposure to companies that lied to the EDA,” said Pablo Quinones, a task force member. He said firms who misled the state on applications would have to pay any credits received back.

In the statement, the spokesman said Cooper had disclosed that it had no intention to move to New Jersey by checking off a box on the application.

“Cooper’s application further specified that it would relocate 372 jobs into Camden,” the statement said. “To date, Cooper has invested $15 million into this project and the number of jobs at this facility has grown to nearly 500 employees. Cooper has thus exceeded all commitments and requirements of the Grow NJ program, complied with the law in all respects and received a Letter of Compliance from the NJEDA each year since 2015.”

The task force was careful to stress that their investigation is still in its early stages, and that they were not yet making criminal allegations regarding issues discussed Thursday.

“This is a hearing, not a trial,” said Ron Chen, the task force chairman.

Chen said the task force had identified nine companies as “entities of concern” and that some would receive subpoenas for more information. About 40 companies have already agreed to submit new certifications about job creation and other promises made in their applications.

The tax break program has been under scrutiny since January, when the New Jersey Comptroller’s office issued a report concluding that billions in tax breaks were approved without adequate due diligence by the state. The investigators found that the state was unable to verify that firms who received tax breaks actually created jobs.

Governor Murphy has called the program an “$11 billion black hole” and his administration is considering reforms that would pare back awards and create more more benefits for host communities.

On Wednesday, Murphy cited reports by WNYC-ProPublica and The New York Times detailing how insiders may have influenced the program.

“Given the breadth of these findings and those so far reported by the task force I commissioned, I believe anything less than a total revamp of the tax incentive program is a disservice to the hard working taxpayers of New Jerssey,”  Murphy said in a statement.

“While Governor Murphy was collecting his pay-to-play gift from President Obama, entertaining the wealthy of Germany at embassy parties, we were back here doing the hard work to rebuild Camden from the most dangerous city in America to the most hopeful city in America,” Christie said in a statement.

The task force, without providing details, says it has already made a criminal referral regarding “unregistered lobbying on behalf of special interests.”

On Thursday, the task force raised questions about changes to the 2013 Economic Opportunity Act, which gave benefits to companies moving to Camden.

James Walden, the panel’s lead attorney, projected sections of the law that changed and revealed that meta data in the documents show the author was Kevin Sheehan, an attorney with Parker McCay, the law firm of George Norcross’s brother, Philip.

Walden walked through provisions in the bill that increased the tax break for several companies that were represented by Parker McCay, including Holtec International, Subaru and Conner Strong & Buckelew, the insurance company owned by George Norcross.

The former president and CEO of the Economic Development Authority testified about the changes, explaining in each case how the rewrite of the legislation resulted in a larger tax break for specific companies.

This report was produced in partnership with ProPublica’s Local Reporting Network, with support from the McGraw Center for Business Journalism at the Craig Newmark Graduate School of Journalism at the City University of New York.