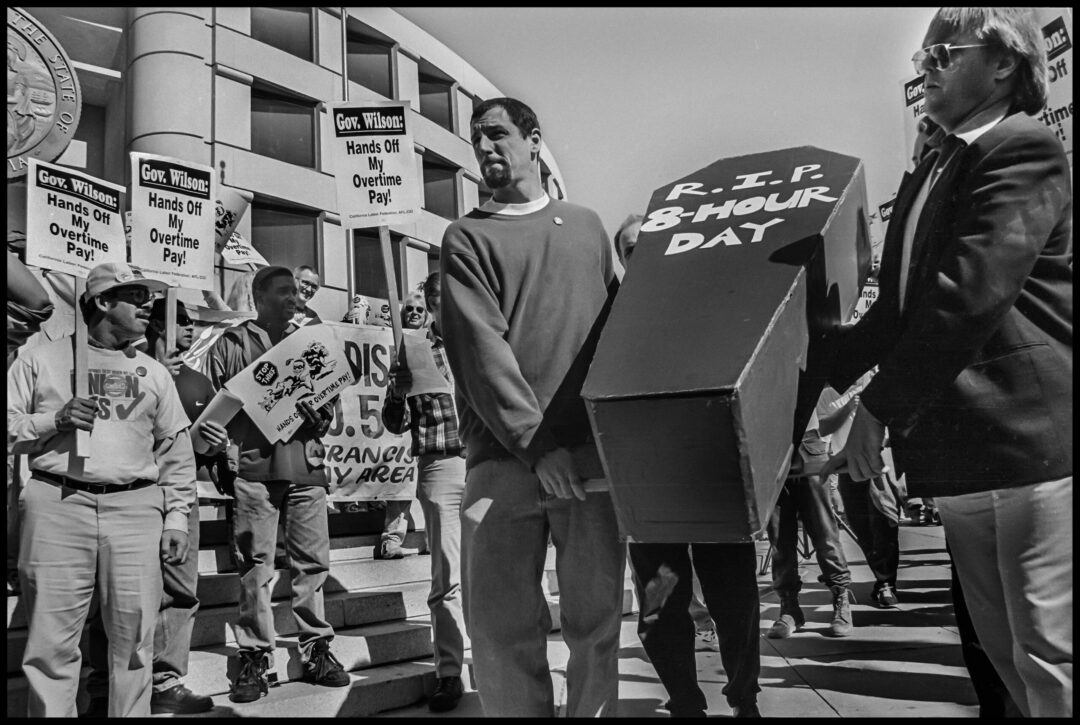 After decades of decline in overtime pay, the Biden administration is considering action to sharply expand access in a time of high inflation. This is the first article of a four-part series examining the 40-year effort by big business and elected officials to deny Americans extra pay for extra work.

While in the White House, Barack Obama had ambitious plans to expand overtime pay to millions of American workers who didn’t receive it, seeking to revive the New Deal promise of a fair wage for a fair day’s work. He was partly inspired by a single mom working at a sandwich shop in Tucson, Arizona.

Elizabeth Paredes was 23 and raising a 3-year-old boy in 2015 when she concluded it was unfair that she didn’t get paid time and a half for the extra hours she put in as an assistant manager at Baggin’s Gourmet Sandwiches. She was working at least 50 hours a week at the deli chain, but still wasn’t earning a higher wage for those overtime hours, leaving her struggling to pay her rent, buy groceries and afford child care. Paredes went to her manager to complain, but she says he replied with the words: “That’ll never happen.”

She didn’t qualify for an overtime wage, a store supervisor explained, because she was a salaried employee and her $24,000 salary put her above the threshold to qualify for overtime pay. That didn’t seem fair, so she decided to contact a person with the power to change the situation for people like her. “Somebody’s got to say something or nothing is going to happen,” she says. 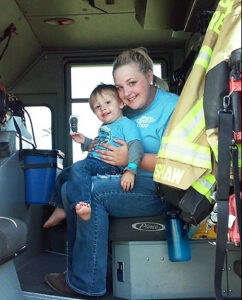 She penned a letter to President Obama that summer to ask the former community organizer to expand the number of Americans who qualify for overtime. “It’s not easy work and requires a lot of time away from my son,” Paredes wrote to Obama. “At times,” she added, “I find [it’s] not worth it.”

Decades earlier, most people in Paredes’ situation did earn overtime. In 1975, more than 60% of salaried workers qualified for time and half pay. (So did most hourly workers.) By 2016, that share had shrunk to less than 7%, according to the Economic Analysis and Research Network, before rebounding slightly in the years that followed.

Paredes didn’t think much about her missive to the president. But a few months later she received a certified letter from Obama in which he’d written that he was “struck by how hard you are working to build a bright future for your son. I want you to know that I hear you.”

Secretary of Labor Tom Perez later called to invite Paredes to a White House event, at which Obama announced a proposal in preparation for two years to expand overtime protections for workers like her.

She couldn’t make the trip due to her work schedule, but she was on the administration’s radar. In a weekly address on May 21, 2016, Obama kicked off his remarks by describing the letter from Paredes, and then announced plans to overhaul overtime rules that would make millions of additional workers eligible. “[Elizabeth] earns about $2,000 a month, and she routinely works some 50 hours a week, sometimes even more. But because of outdated overtime regulations, she doesn’t have to be paid a dime of overtime.”

Then, as now, the vast majority of people who work more than 40 hours are excluded from overtime for earning too much, but the income threshold for exclusion has long been notably low. In 2016, people earning more than $23,000 in salary — equivalent to about $11 an hour on a full-time schedule — were ineligible. That overtime pay eligibility threshold, which topped out at much less than the median salary in the country, hadn’t changed in over a decade. Nor had it kept pace with inflation since Gerald Ford was president, meaning that millions of workers saw their overtime eligibility slide away as their income increased, in some cases very moderately. 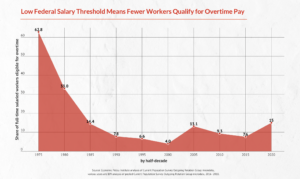 Obama proposed to more than double the maximum income limit to $47,000, which would have extended overtime protections to an additional 4.2 million workers. The change would, according to his administration, increase wages for such workers by $12 billion over the next decade.

“This is the single biggest step I can take through executive action to raise wages for the American people,” said Obama in his 2016 address. “It means that millions of hard-working Americans like Elizabeth will either get paid for working more than 40 hours, or they’ll get more time with their families. Either way, they win, the middle class wins, and America wins.”

Days after Obama’s speech, when Paredes walked into work, she recalls, she was mocked by her supervisors for being a “rock star” whose name was on the president’s lips.

But that didn’t translate into more income. Several months later, Paredes says she was transferred to another store and told to work the grill. She perceived the change as a step down from her previous job — and she never did earn any overtime. She didn’t even receive the annual pay raise she was accustomed to. “I got nothing more than snide remarks,” she says.

“That was the last straw and I quit.”

The chain’s management did not respond to multiple requests for comment by phone and email.

Paredes ended up moving to Pennsylvania where she works part time at her fiance’s family’s restaurant while also raising her son.

It turns out that the Obama administration’s overtime effort wouldn’t have helped Paredes even if she had stayed in her old job. Six months after the presidential speech — and before the plan was implemented — dozens of industry groups and states sued the administration to block the proposed changes. A federal judge concluded, based on the plaintiffs’ arguments,  that it was a case of government overreach. Obama’s modernized vision of overtime was dead. 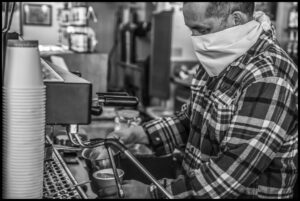 A barista at a cafe in Berkeley whips up a coffee drink in 2020. In the months after COVID-19 slammed California, most people stayed home and sheltered in place, but due to a pandemic-induced shortage of workers, Carlos often worked overtime in what authorities deemed an essential job. Photo: David Bacon

Things ultimately changed for some workers, but only after Obama had been replaced in the White House. The Trump administration was much less ambitious, implementing a split-the-difference overtime expansion that was more amenable to industry; it raised the overtime income threshold to $35,000 in 2019 and broadened overtime eligibility to an estimated 1.3 million additional workers. That was half of the increase that Obama attempted, but it left nearly 3 million additional workers who stood to benefit from Obama’s proposal out of luck. Most significantly, though, Trump’s overtime expansion passed legal muster.

Some economists noted that Trump’s overtime expansion wasn’t nearly large enough to make up for decades of lost wages. And it didn’t help the typical worker at all. The overtime threshold of $35,000 remains far below the typical salary for a full-time worker. In 2021, that was $51,480, slightly more than the upper limit that President Obama sought.

The Trump administration also neglected to automatically index the new overtime salary limit to inflation, meaning that in times of declining buying power for many, overtime eligibility has slipped away from more workers, sometimes as they received very small raises.

Meanwhile, many people have lost economic ground, in some cases a great deal, over the years due to rising prices. When adjusted for general inflation, the typical worker’s wage increased just 8.8% between 1979 and 2019, even as real housing prices jumped 50% and health care costs soared.

No Overtime Pay in Classrooms or on the Farm

There are other reasons that tens of millions of Americans who work more than 40 hours weekly don’t qualify for overtime. Some don’t receive it because they work in one of the numerous occupations — such as farm work and teaching — that have long been exempt due to industry lobbying and political compromise.

In 1938, the Roosevelt administration accepted the exclusion of farmworkers from overtime protections to win the votes for the Federal Labor Standards Act of Southern Democrats whose rural constituents relied largely on poorly paid Black labor. Eighty-four years later, that exclusion remains. 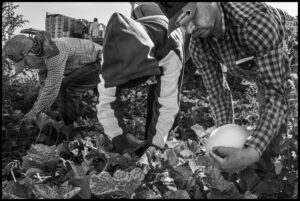 Most farmworkers won overtime rights in California in 2019, but those on H-2A visas, which allow migrants to come to the U.S. to work, have fewer practical labor rights because they can be fired and deported in retaliation for highlighting illegal conditions. Here, H-2A workers harvest melons for the Rancho Nuevo Harvesting Company in the San Joaquin Valley in 2021. Photo: David Bacon

Other workers miss out on overtime because they have minor management responsibilities. Even fast-food managers who work the grill and sweep bathrooms are exempt if at least half of their time is spent “managing” two or more employees.

If excluded workers did earn overtime, the additional money they made would be substantial. Nationwide, about 18 million people say they work more than 50 hours a week. This suggests that the vast majority of them are not receiving time and a half for at least 10 hours of work.

The Biden administration has promised to remedy this, at least for some workers, likely by sharply increasing the maximum income eligible for overtime pay and by more narrowly defining managerial duties that exclude many workers from overtime.

Congresswoman Pramila Jayapal, of Washington state, told Capital & Main that dozens of progressive lawmakers stressed the importance of raising the overtime income threshold to President Biden in meetings at the White House in late March. She declined to characterize the president’s response, but the Department of Labor is reportedly set to unveil a formal proposal on overtime in the coming months.

There’s little doubt that the administration’s effort will face opposition from much of the business lobby and some fiscally conservative lawmakers, who have already written to Labor Department Secretary Marty Walsh to argue that expanded overtime protections will weaken American businesses. 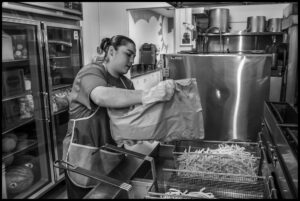 Overtime hours are common in many fast food establishments, especially after the pandemic triggered labor shortages of workers willing to accept such low-wage jobs. Here, a worker in Arcadia, California, in 2006, makes sure customers get their sides of fries. Photo: David Bacon

They have made similar arguments against increases in the minimum wage for generations. Advocates for overtime reform counter by highlighting the link between such wage issues and the widening gap between the rich and low income workers in the country. The Economic Policy Institute cites weakened labor standards, including “eroded overtime protections,” as a factor in the worsening wage inequality over the last four decades. While worker productivity has sharply increased during that time, most of the rewards have gone to executives and corporate shareholders, even as median wages stagnated.

The decline of overtime “parallels the entire history of the drop in median wage relative to productivity,” says Marilyn Watkins, a professor at the University of Washington School of Public Health.

Watkins, who has studied labor and employment issues, adds that “there was a cascading set of policies through the 1980s, 1990s and 2000s that just enabled in all sorts of ways the income and wealth gap to grow.”

When it comes to overtime, there are ever more categories of employees who are exempt from overtime pay, including computer programmers, insurance claims adjusters, news editors, most delivery workers and movie theater staff.

Sociologist Kimberly Bobo, the author of the book Wage Theft: Why Millions of Working Americans Are Not Getting Paid — And What We Can Do About It, provides a simple overarching explanation.

“Many of these job categories are only ‘exempt’ because employers groups have lobbied hard to have made them ‘exempt,’ rather than because there is some intrinsic reason why the workers shouldn’t be provided overtime pay,” she says.

Reporting for this story was supported by the McGraw Fellowship for Business Journalism at the City University of New York’s Craig Newmark Graduate School of Journalism.

Stories
Marcus Baram
Journalist and editor. His feature writing and investigative reporting has been published in the New Yorker, the New York Times, New York magazine, Vibe magazine, the Village Voice and the New York Post.
<