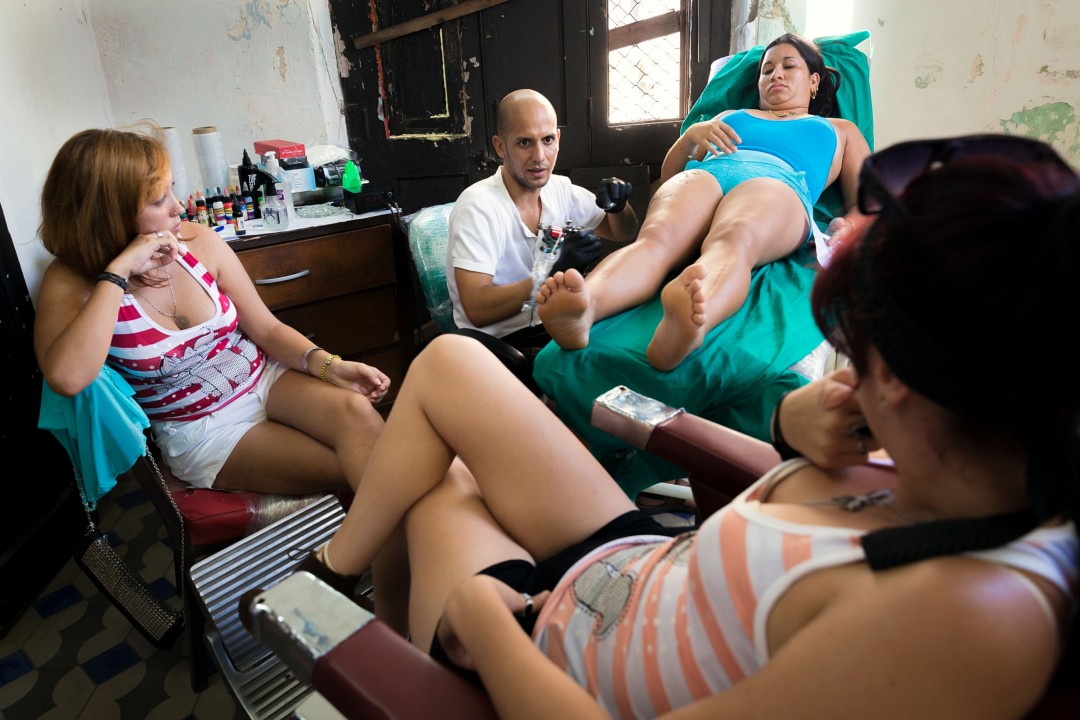 HAVANA — In an upstairs apartment of a building soon to become a hotel, Rubén Garcel gives shape with black ink to a design of roses and thorns on a woman’s thigh.

In a room with high ceilings, plenty of daylight and peeling paint, the woman, Elizabeth Jardines of the Vedado neighborhood, lies on a reclining medical table. Two friends accompany her.

Garcel has his materials, including inks and disinfectant, on top of a chest of drawers. He is slender, his hair is shaved, his voice is soft. With black gloves on, he focuses on the design.

Jardines said all her friends have tattoos. Leticia Artime, who waits next to her, has some by Garcel.

These clients are among a growing number of Cubans who want tattoos, Garcel said.

“Cuba is opening to the world,” he said in Spanish.

Even policemen and members of the military get tattoos, he said. He stays busy, making appointments at his Ruben Tattoo shop for two-week periods and turning some away when his schedule fills up.

This is a lucrative business.

“In Havana, there are three professions that give money: barber, singer and tattoo artist,” he said.

Garcel started as a part-time tattoo artist while teaching art in Holguín, in eastern Cuba. He learned by reading magazines and experimenting on his first clients.

“There are not tattoo courses that you can take here,” he said. “If I had had access to Internet, I would have known that it’s possible to try on chicken skin.”

He moved five years ago to Havana, where he said there is a more progressive culture.

“In the world of tattooing, of the fresh, of the new ideas that are emerging, here in Havana is where you can get more fulfilled,” he said.

Holguín has a preference for older-style tattoos, the American traditional style, such as the ones found on a sailor.

Havana’s style is more urban, he said. Clients look for perfection, for the lineal tattoo, the contrast between light and dark — the beauty. Havana tattoo artists copy a lot of European and American styles. Cuba doesn’t yet have its own pure style, he  said.

Garcel and others encourage clients to consider tattoos rooted in Cuba’s short history and traditions, such as el Capitolio or Fidel Castro jumping from a tank in the battle of Giron, he said, just like Americans like patriotic tattoos.

While there is a tradition of having the image of revolutionary Che Guevara tattooed, “people don’t follow you,” he said.

Some go for a fighting cock, or images associated with Santeria, a religion born out of a mix of Catholicism and African cults.

Garcel’s profession is not on the list of licensed business activities for Cubans to pursue. It isn’t regulated. Tattoo artist Ruben Garcel works on a tattoo for a client in his makeshift Central Havana tattoo studio. (David Albers/Staff)

That leaves Garcel in a sort of limbo. The authorities don’t usually bother them, he said, but he cannot advertise, either. At times, he fears he and other tattoo artists could be censored.

Garcel once thought about leaving Cuba to join family in the U.S. But he prefers to be a tattoo artist in Cuba, where he can make a name for himself, rather than working as a waiter making ends meet in the U.S.

“One thinks about emigrating, but this country is beautiful,” he said.

Many of the supplies Garcel uses — ink, needles and gloves — come from Florida, including a Miami supplier. Sometimes, he said, friends bring them to the island.

He said he has been saving and, in three years, he would like to set up his own studio instead of moving from one rental to another. He likes to work in a central area, near Old Havana, but houses usually are deteriorated.

Soon he will have to move again. The building where he is working, a few feet from El Malecón, will become a hotel. Young adults sing and dance to a street performer’s music on the Malecon, a seawall stretching along the northern edge of Havana. (David Albers/Staff)