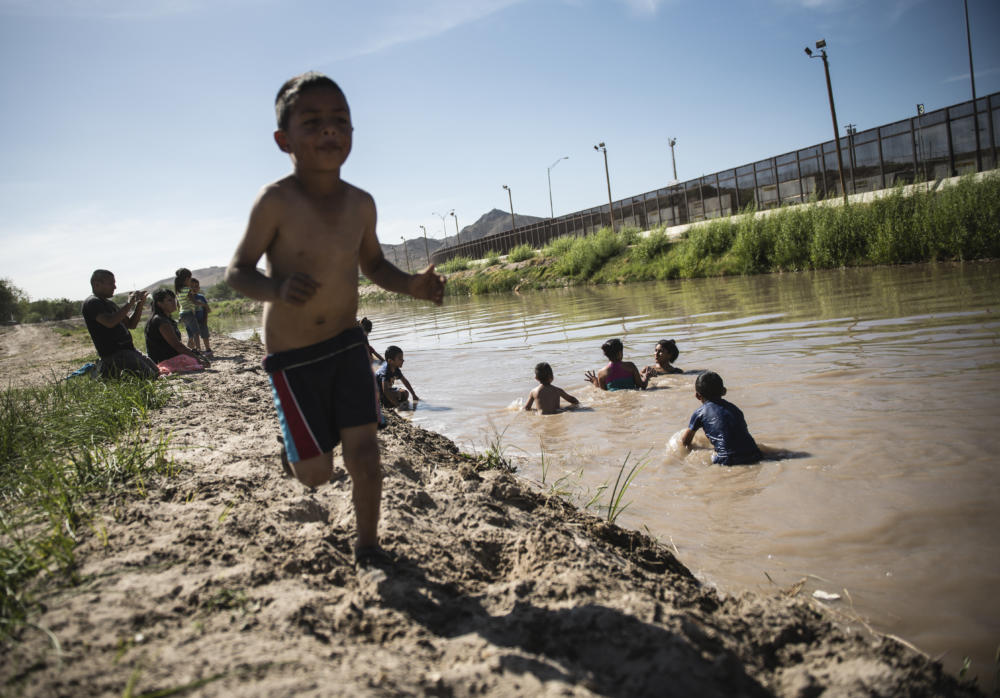 When a drinking water pipeline built by Mexican conglomerate Grupo Carso bypassed Anapra to serve other Ciudad Juárez neighborhoods, residents asked why. This is the third in a five-part series. The first two installments were published on June 25 and July 2.

ANAPRA, Mexico – In the sun-baked hills of this working-class neighborhood nestled against the U.S. border fence, Emma Palacios worries every day about getting her family’s ration of potable water.

Like most of Anapra’s 4,500 or so households connected to Ciudad Juárez infrastructure, Palacios pays the city for running water.

But the tap water is so saline – with total dissolved solids more than double the permitted level in Mexico – that she and her family can’t drink or cook with it. The water eats away at metal and concrete in a matter of months, and the bathroom smells like the ocean.

“Not even boiling it can we drink it,” she said. “It has a very strong, salty taste. I only use it to wash.”

Anapra, the neighborhoods closest to the border, is what Americans see of Mexico driving I-10 through El Paso: desert hills crowded with concrete block houses and makeshift shacks. It was squatters’ land in the 1980s, hard to govern, and it took decades for the city to lay down basic infrastructure.

When Ciudad Juárez decided 10 years ago to pipe water from a binational aquifer it shares with Las Cruces about 14 miles west of its urban edge, it chose to bypass Anapra and deliver water only to lawfully settled neighborhoods on the west side – leaving a poor community without potable tap water.

Instead, the city supplies Anapra residents with drinking water at a half dozen kiosks.

They’re open for one hour and a half each morning and one hour in the afternoon – both windows during which Palacios, like many local residents, is working her shift at a maquila assembly plant that makes auto parts for a U.S. company.

Mexican billionaire Carlos Slims’ Grupo Carso built the water pipeline under contract with the city: It heads for Anapra. Then it takes a sharp turn south at the top of the mesa to supply other neighborhoods on the city’s west side.

Anapra residents rely instead on three wells that pump from a shallow, naturally brackish pocket just outside the aquifer.

The water quality in Anapra “is two to three times as bad as what we allow for public water supply in the United States,” said John Hawley, a hydrogeologist who has studied the region for decades.

He reviewed the results of water samples taken by the Journal from homes in Anapra, as well as three other neighborhoods on the city’s west side that are served by the Carso pipeline. New Mexico State University’s Department of Civil Engineering tested the samples.

“Water of that quality, it isn’t ocean water but it severely damages infrastructure from toilets to taps to septic,” Hawley said.

Palacios, with dark wavy hair and arched brows, explains, over the chirping of a dozen caged parakeets, that she works 6 a.m. to 3 p.m. at the maquila. Her husband, Gonzalo Soto, works a night shift stocking shelves at a local grocery store chain and gets home before dawn. They have three children.

In the summer, she says, sometimes the waiting line at the kiosks is so long that the drinking water runs out.

At home, Palacios often goes without water for showering in the pre-dawn hours when she is getting ready for her factory job. She fills up pots at night to heat on the stove for bathing.

Anapra falls within the boundaries of Ciudad Juárez municipality and is governed by the city, grudgingly so.

Thousands of migrants flocked to Ciudad Juárez in the years running up to and after the North American Free Trade Agreement, when the maquila industry began its decades-long boom and the border town became a beacon of opportunity for poor Mexicans from the rural south.

Many in the 1980s and 1990s settled in the hills outside Juárez, in many cases squatting on undesirable land and erecting makeshift housing from reclaimed materials. The area became known as “Rancho Anapra,” an impoverished bedroom community with no running water or electricity.

Today, Anapra’s main road is paved; nearly all the homes have light and a popular grocery store chain anchors one busy corner.

With donations of paint from government and nonprofit groups, residents transformed the drab brown and gray facades of their homes into a rainbow palette visible from I-10. Palacios’ home, built by a U.S. Christian group 10 years ago, is a colorful shade of green she calls “pistachio.”

“Anapra has always been characterized as the dormitory for Juárez industry,” said Keith Boone, who owns the land near Anapra where the Carso pipeline turns south. “It’s basically been illegally settled. Never with any planning. Never with anybody holding titles to properties. It’s been a constant problem for every administration to get them regulated.”

“Anapra is kind of an island,” Boone said. “There are five colonias that compose Anapra, and between them and Juárez is a big void. So I’m assuming that they did not design Conejos Medanos to bring water into that island area. I think they felt, ‘this is good enough.’ And Conejos Medanos (water) was destined to Juárez proper.”

At 4 p.m. on a warm, windy spring day, people start flocking to a water kiosk next to a Catholic church on hill in the heart of Anapra. Women and children drag makeshift wagons carrying five-gallon garrafones, empty milk jugs or old yogurt containers. Men hoist the five-gallon jugs to their shoulders and walk dusty roads home.

Nearby, Gabriela Hinojosa is selling used clothes on a table set outside a home near the kiosk. It’s not just how salty the water is, she said; every day the tap is dry for hours. Palacios shared the same story.

“Here it’s typical,” Hinojosa said. “The city does nothing. We have a voice, but nobody listens.”

The Journal spoke to half a dozen Anapra residents, whose water was metered by the city. Monthly bills ranged from 250 pesos to 600 pesos, or about $13 to $32. Full-time maquila workers typically earn less than $30 a week.

“We have fought like you have no idea,” Hinojosa said. “Why do you charge us for water when we can’t drink it?”