A False Answer, A Big Political Connection And $260 Million In Tax Breaks 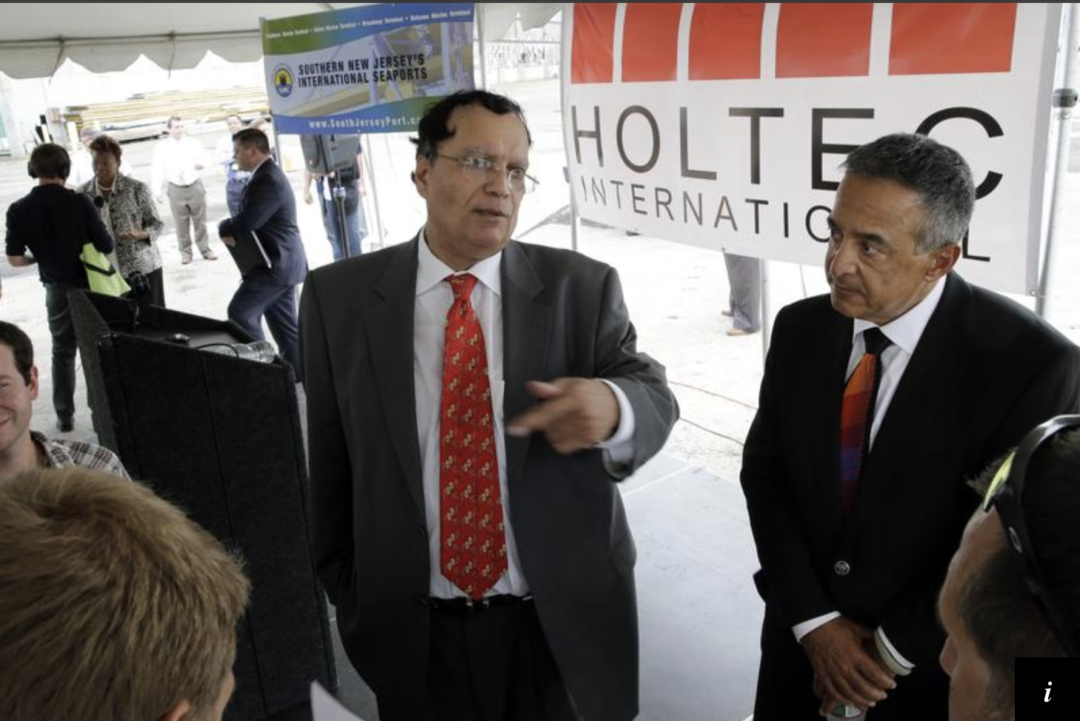 This article was produced in partnership the ProPublica Local Reporting Network. It was co-published with The Star-Ledger.

A company that won the second-largest tax break in New Jersey history gave a false answer about being prohibited from working with a federal agency in sworn statements made to win $260 million in taxpayer assistance for a new plant in Camden.

A review by WNYC and ProPublica found that Holtec International CEO Kris Singh responded “no” on certified forms submitted to the state in 2014 that asked if the applicant had ever been barred from doing business with a state or federal agency. The forms were submitted to the New Jersey Economic Development Authority as part of its successful application for tax breaks.

In fact, the international nuclear parts manufacturer was caught up in a contracting investigation at the federally owned Tennessee Valley Authority. In 2010, Holtec was barred for 60 days from doing any federal business and paid a $2 million administrative fine to the TVA, according to an agency report.  Holtec’s debarment marked the first time the agency had taken such action against a contractor.

A TVA official pleaded guilty in U.S. District Court in Alabama for “knowingly and willfully” making a false statement on a financial disclosure form, according to a Department of Justice press release from 2007. The official failed to disclose a payment from a contractor that originated with Holtec, the court documents said.

Holtec later went on to rebuild its relationship with the TVA,  and it secured additional contracts to supply casks that store spent nuclear fuel.

Five days after WNYC and ProPublica contacted Holtec seeking comment about its incorrect answer on the application, an attorney representing the firm sent a letter asking the EDA to correct Singh’s answer in the 2014 application.

Kevin Sheehan, an attorney with the Parker McCay law firm, which represented Holtec in its application for tax breaks, wrote to the agency that the mistake was “inadvertent.”

Joy Russell, Holtec’s senior vice president of business development and communications, in an emailed statement called the incorrect answer “an oversight” by Singh. Holtec’s company ethics policy, which is included in a court filing, warns employees to use great care in signing documents filed with government officials that could subject the company or the employee to legal problems.

The application process for state tax breaks is supposed to include a rigorous review by EDA officials of all statements submitted by a company. In Holtec’s case, emails recently released to WNYC and ProPublica show that the staff went back to the company to clarify questions about the company’s financial calculations and raised concern that Singh was late in filing required certifications as the date approached for review of the EDA application.

In a statement, an agency spokeswoman said the EDA “does not comment on matters related to pending litigation.”

The board approved Holtec’s application in July 2014 in a 10-0 vote, with two board members abstaining.

It is unclear what steps the agency would have taken if Singh had answered truthfully or if Singh’s false answer had been discovered during the staff review.

In a statement, the EDA said the tax break law gave it the authority to take back tax credits, but stopped short of saying how it might proceed against Holtec. “In the case of a representation in an application that is false, misleading or inaccurate in any material respect…the NJEDA could declare a default, potentially resulting in termination of the agreement and/or recapture of the tax credit,’’ EDA spokeswoman Virginia Pellerin said in the statement.

Singh’s sworn statements were part of a checklist in which the company must attest that it has faced no criminal convictions or other legal issues. Singh checked “no” to all of the questions.

Holtec’s new factory in Camden is part of a resurgence for the poverty-stricken city pushed by South Jersey Democratic boss George E. Norcross III, who is an unpaid member of Holtec’s board.

Norcross’ brother Philip is managing partner at the law firm that represented the company in its EDA application, Parker McCay.

Sheehan worked closely with Philip Norcross on the Holtec matter,  according to the emails obtained by WNYC and ProPublica. The law firm’s work on behalf of several Camden projects is now under scrutiny,

Tim Lizura, the former president and chief operating officer of the EDA, declined to be interviewed.

The emails show Lizura closely monitored the Holtec application, presiding over meetings and phone calls between the agency and company representatives.

Gov. Phil Murphy has appointed a task force to investigate the state tax break program. It’s lead lawyer said a misrepresentation on an application could result in the cancelation of the tax break.

“First of all, the EDA can suspend the grant pending the investigation,” said Jim Walden, special counsel to the task force. He declined to comment on the Holtec application specifically but agreed to discuss how the task force is handling problems with applications in general.

“If the relevant authority determined there was a misrepresentation, they can terminate the grant, they can seek fines and penalties and in circumstances where there is information about a willful failure to disclose, obviously there’s a possibility of criminal penalties as well,” Walden said.

At a hearing this month, Walden said misrepresentations on tax incentive applications involving other companies have resulted in federal mail and wire fraud charges elsewhere in the country.

The TVA case dates to 2001, when Holtec contracted with the TVA to design and build a storage system for spent nuclear fuel. A criminal investigation by the TVA inspector general led to the creation of a formal process to debar Holtec. It was the first debarment in the federal agency’s 77-year history.

In addition to being barred for two months and paying a $2 million fine, Holtec agreed to independent monitoring, according to the TVA inspector general’s report. Holtec also was required to install a corporate governance office, the inspector general said in a report, “to gauge what progress in business ethics the company was making, if any.”

“Once those corrective actions were completed to the satisfaction to TVA, then the debarment was lifted,” said Jim Hopson, a spokesman for the TVA.

The case appears to have been a minor bump in the road for Holtec, which  is one of three companies in the world that makes dry storage casks for nuclear waste.

“We currently have a great majority of the plants in the United States and more than 50 overseas that utilize our spent fuel technology,” Singh, the Holtec CEO, said at a press conference in 2017.

Holtec said in its explanation to the EDA that the company now holds a $300 million contract at the TVA and “currently remains a valued client.”

Holtec’s tax break in New Jersey has recently come under scrutiny. George and Philip Norcross are closely tied to the company and were involved in the 2013 legislation that helped Holtec obtain a tax break that was equal to its capital investment in Camden.

George Norcross has sway over the largest voting bloc in the state Legislature, and he is particularly close to Senate President Stephen Sweeney. The Economic Opportunity Act of 2013 removed the cap on the size of the awards and gave special advantages to companies moving to Camden. As a result, at least 12 companies with connections to Norcross received $1.1 billion in tax breaks.

“Camden is experiencing a tremendous buzz in the region,” Norcross told WNYC and ProPublica in March. “There’s a lot of enthusiasm going on in the city, and people, at least in our neck of the woods, are feeling pretty good about a place that is formally, embarrassingly, known as America’s most dangerous city.”

George Norcross’ insurance company, Conner Strong & Buckelew, was the broker for construction insurance at the Holtec site, according to an invoice that was part of a lawsuit between Holtec and Joseph Jingoli & Son Inc., the construction contractor.

Norcross has hired a team of well-known lawyers in New Jersey, and they filed a lawsuit this week trying to block the investigation by the task force appointed by Murphy into the tax break program.

Another of Norcross’ brothers, U.S. Rep. Donald Norcross, has received $18,750 in campaign contributions from Singh, the CEO, according to federal election records. Singh also loaned $250,000 to General Majority, a political action committee for which George Norcross raises money.