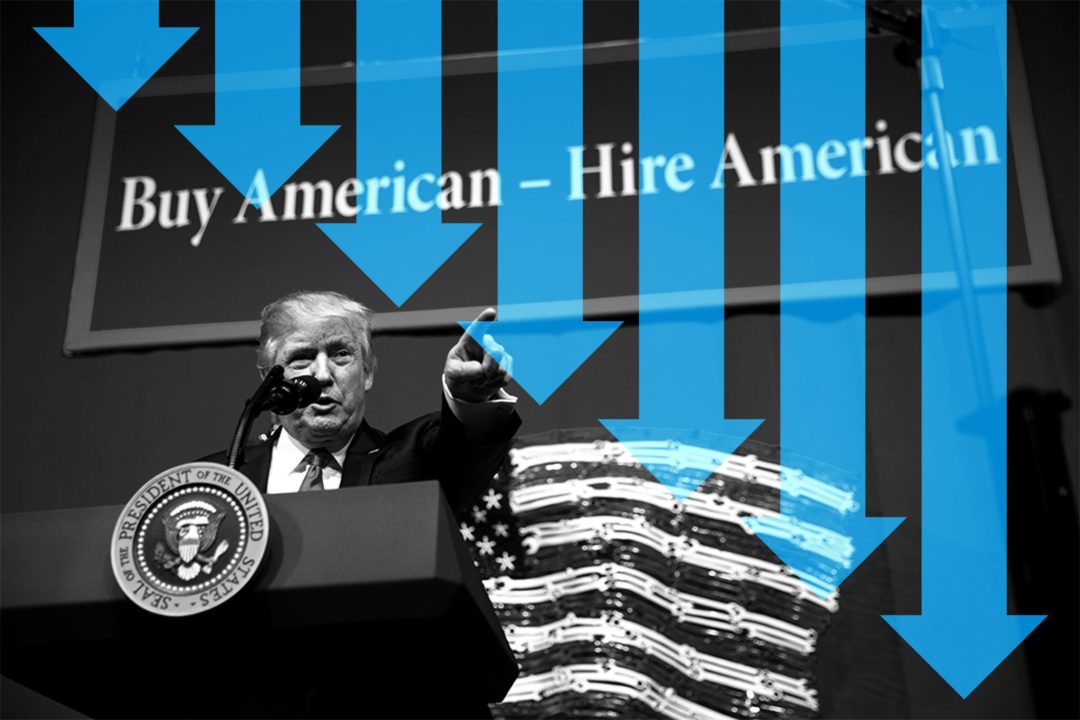 There are millions fewer jobs in the United States than there were at the start of the pandemic, and data released on Friday showed an unexpected slowdown in hiring. In a speech to a joint session of Congress last month, President Biden said a priority of his economic rescue plan was to create “good-paying jobs that can’t be outsourced.”

Also last month, Madhur Parashar moved to Vancouver, British Columbia — and took with him his job as a product manager at a company based in Columbus, Ohio. After receiving a master’s degree from the University of Rochester, Mr. Parashar, who emigrated from India, had worked in the United States on an H-1B visa for almost 11 years.

Mr. Parashar decided to leave the United States after his wife, who is also Indian, lost her job as a corporate lawyer in April last year. Her application for the work permit granted to spouses of immigrants working legally in the United States is still pending, part of a backlog that emerged after the Trump administration changed the approval process and that grew during pandemic-related office closures.

Canada approved Mr. Parashar and his family for permanent residency through Express Entry, an immigration program for skilled workers. He asked his employer to let him work from Canada, and the company agreed.

“They kept saying that H-1Bs take away jobs from Americans,” Mr. Parashar told DealBook. “They have kind of pushed us to the point where we have to leave,” he said, noting that he works with the same clients as before.

Efforts to restrict the H-1B program, which is intended for workers with special skills though has in some cases been exploited by companies to hire cheaper labor, are often framed as a way to protect American jobs. The visas “should never, ever be used to replace American workers,” President Donald J. Trump said in 2017when he signed a “Buy American and Hire American” executive order, which increased scrutiny of H-1B visa applications.

But does making it harder to obtain an H-1B visa result in more American jobs?

Interviews with immigration lawyers and H-1B visa applicants suggest that when the Trump administration introduced additional scrutiny of H-1B applications, companies often shifted workers or hired elsewhere instead of filling the roles with American workers.

This is consistent with research by Britta Glennon, an assistant professor at the Wharton School of the University of Pennsylvania. In a working paper last year, she analyzed the data on U.S.-based multinational companies between 2004 and 2014 and found that those dependent on H-1B visas were more likely to expand overseas when facing immigration restrictions, like when the cap on visas was lowered in 2004. 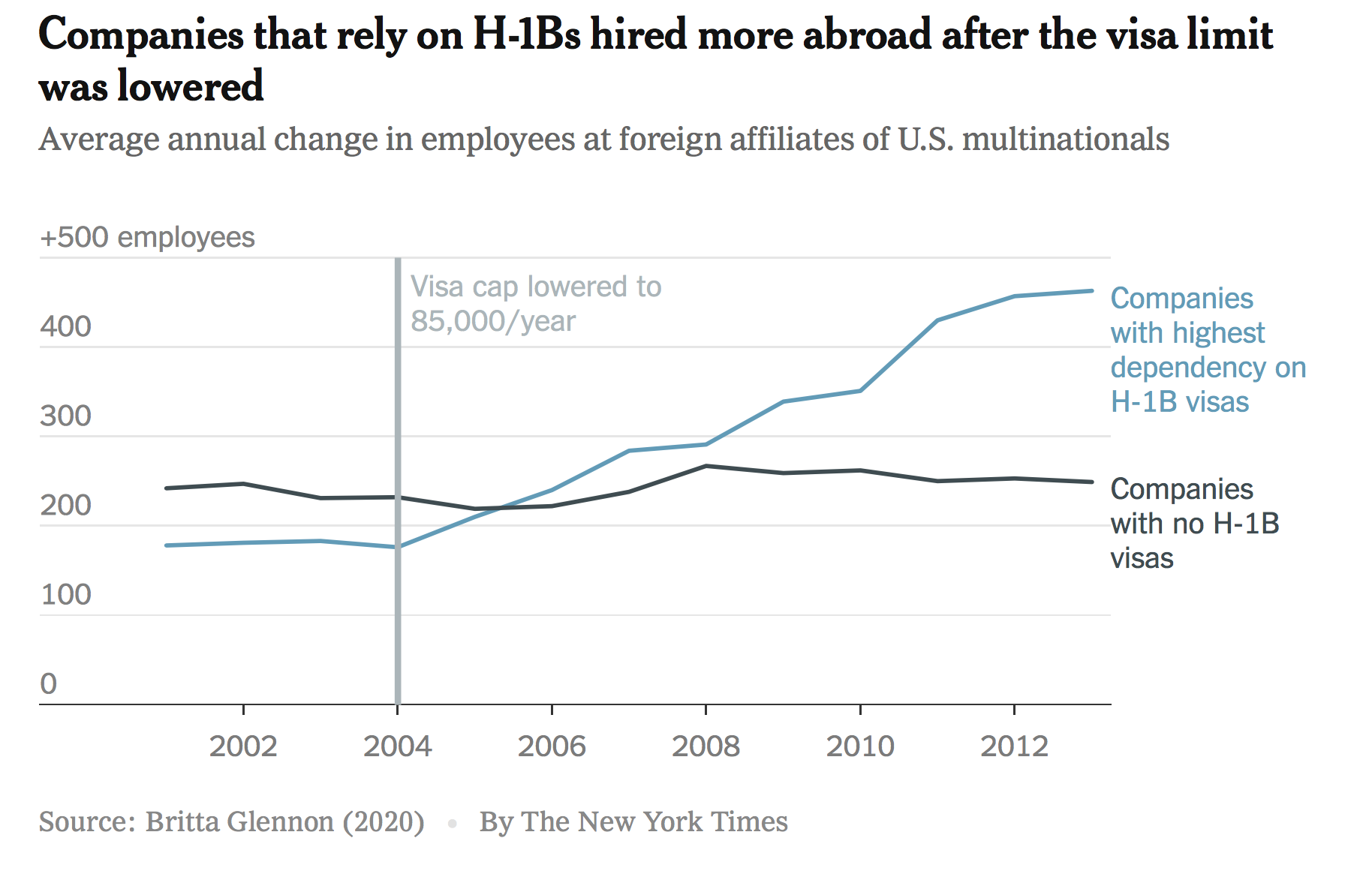 Ms. Glennon calculated that for every 10 unfilled H-1B positions, an equivalent of three jobs were created overseas. The work that would have been done in the other seven jobs was spread around. Some was outsourced to other companies, some was done by industry-university partnerships, and a “much, much smaller” amount was done by newly hired American workers, she said.

The chances of getting an H-1B visa have never been lower. In a randomized lottery each year, U.S. Citizenship and Immigration Services chooses 85,000 applicants to receive the visa, a cap that has remained unchanged since 2004. This year, the lottery pool contained about 308,000 applicants, meaning only one in four applicants was selected.

Meanwhile, the chances of an application’s approval after it has been selected in the lottery have also gone down. After the “Buy American and Hire American” executive order went into effect in 2017, Citizenship and Immigration Services issued policy memos that took a stricter stance on the qualifications of workers in computer-related jobs and on requirements for consultants who typically work at client sites.

From 2016 to 2019, the percentage of H-1B applicants asked to submit additional supporting materials after being selected in the lottery increased from 21 to 40, while the approval rate dropped from 94 percent to 85 percent, according to Citizenship and Immigration Services. (The agency accounts for some denials in the lottery so that all 85,000 visas are granted regardless of the approval rate.)

The additional scrutiny of applications hit Indian outsourcing companies that operate in the United States — six of the top 15 H-1B sponsors — the hardest. But within a couple of years they recovered and hired even more H-1B workers. All but two of the top H-1B visa sponsors followed a similar pattern: The number of visas they sponsored decreased in 2018, after the new policy, but then recovered. 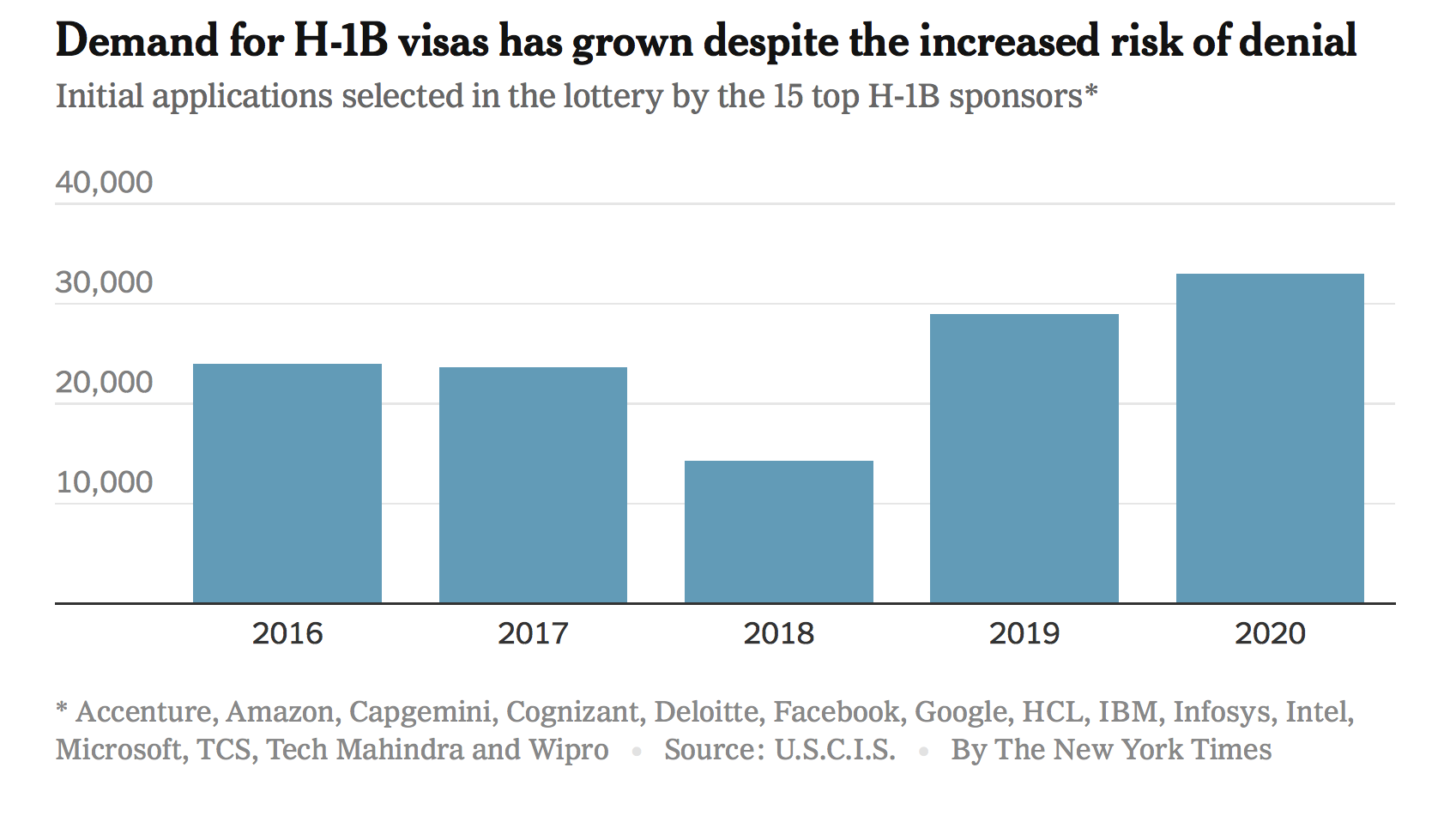 Lauren Jo, an immigration lawyer in New York, told DealBook that when one of her former clients, an information technology consulting company, tried to avoid compliance requirements for H-1B workers on third-party client sites by hiring only American workers for these positions, the company couldn’t make it work.

Like large outsourcing companies, tech companies are particularly reliant on H-1B visas. Foreign students make up almost half of graduates with advanced degrees in science, technology, engineering and math in the United States, and many foreign nationals who apply for U.S. work visas are already working at tech companies with student work permits, which allow them to work in the United States for up to 36 months after graduation. After that period, not getting a work visa means the company has to either let the employee go or find another way to retain the person. 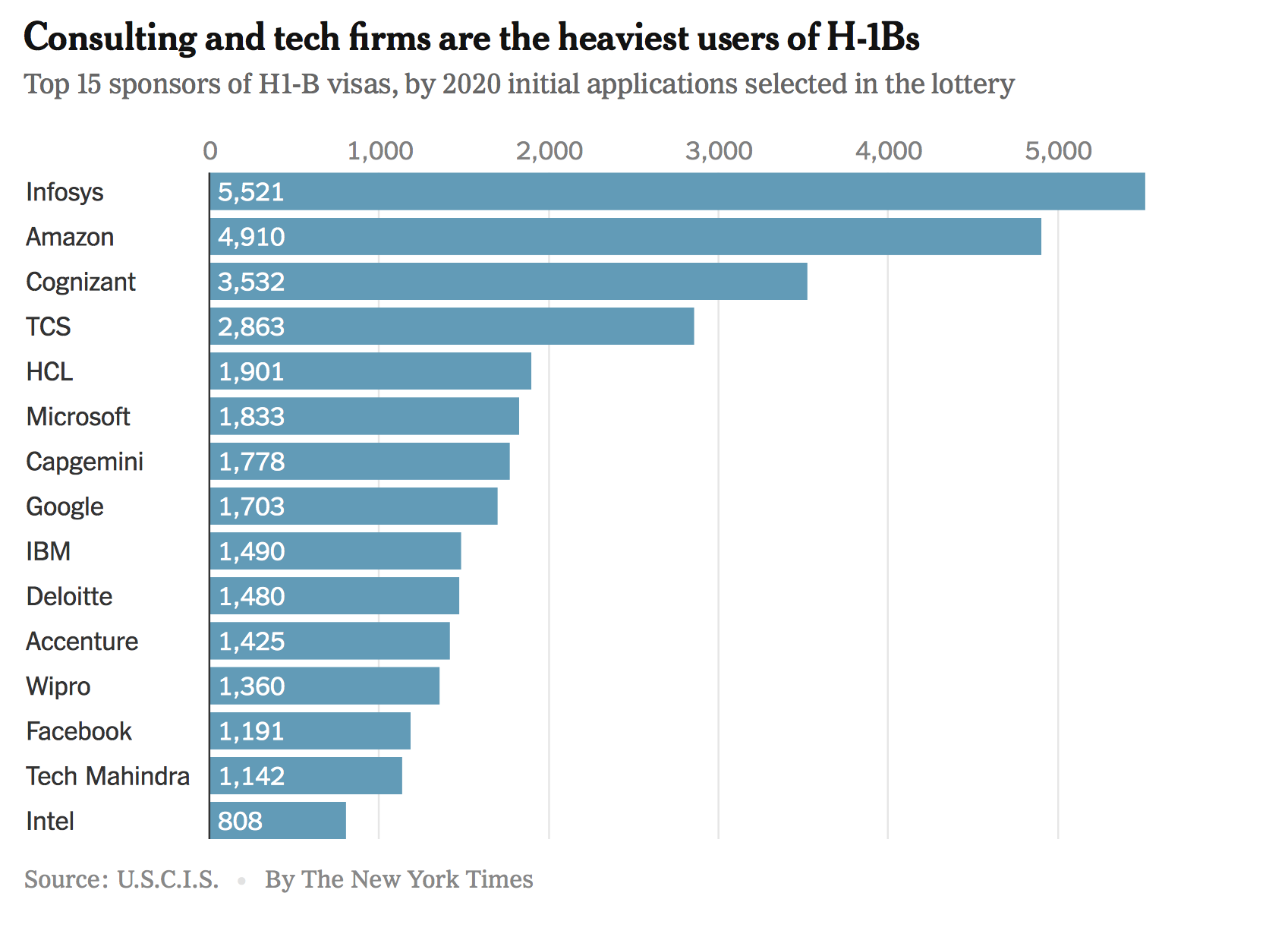 Seven current and former employees of Amazon, Facebook and Google, which are among the top H-1B users, told DealBook that if they weren’t chosen in the lottery, the company would provide the option of transferring them to an overseas office and asking them to apply for an H-1B visa again the next year. Six immigration lawyers and immigration consultants confirmed that this was a typical strategy. Amazon and Google declined a request to comment on the practice, and Facebook did not respond to a request to comment.

DealBook obtained an internal training video played for foreign workers at Cerner, a medical software provider and the largest H-1B visa user in Kansas City, Mo. In the video, the company provided three options for employees who didn’t win the H-1B visa lottery: Re-enroll in a degree program and work for the company on a student visa, a practice embraced by companies and universities in recent years; move to India if they had authorization to work there; or leave the company. Cerner declined to comment on the training video.

Obtaining a work visa is getting marginally easier. The Biden administration has already lifted some of the Trump administration’s changes to the application process. Spouses of immigrants applying for work permits will no longer need to be fingerprinted and photographed, a requirement that was put in place in 2019 and lengthened processing time, forcing tens of thousands of workers, like Mr. Parashar’s wife, to wait in visa backlogs during the pandemic.

In late April, the Biden administration issued policy guidance that asked immigration officers to defer to prior decisions when reviewing visa extension cases, a long-existing practice that was rescinded in 2017. The policy memo that made it more difficult for entry-level computer programmers to get a work visa was also rescinded in January.

These changes are taking place against a backdrop of a long-term trend in work force globalization that is driven by many factors, including the availability of skills and the relative cost of labor in other countries. For example, according to a review of jobs posted on top H-1B users’ websites by the data provider Thinknum, since 2018 the share of job openings outside the United States at Accenture, Capgemini and Cognizant has grown while the share of advertised U.S. jobs has shrunk.

If companies can’t get the visas they want to sponsor foreign workers in the United States, there is little stopping them from hiring workers outside the United States. And the increasing acceptance of remote work after the pandemic may mean even more types of jobs can be filled anywhere in the world.

Ben Wright, the chief executive of Velocity Global, a professional employer organization that hires workers overseas for clients while they wait for U.S. visas, said companies had been willing to accommodate foreign workers who could not come to the United States because of pandemic restrictions.

“You’re also seeing hiring managers say, ‘My gosh, my eyes are opened to the fact that we really can work from anywhere,’” he said. “That’s pulling these companies globally in a way that has never happened.”

This article was reported with support from the McGraw Center for Business Journalism at the City University of New York’s Newmark Graduate School of Journalism. 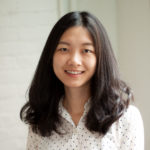 A New York- based freelance data journalist, Zhou works with graphics and code to tell stories. She will use the Fellowship to report on the impact of US immigration policy on skilled workers and its economic implications in an increasingly globalized world.
<