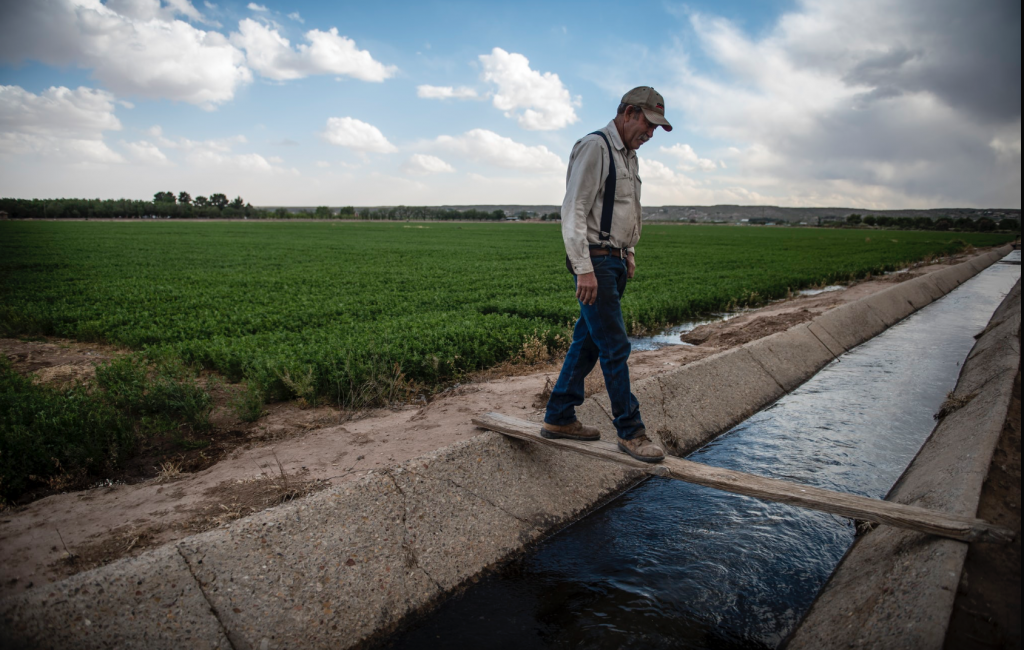 SANTA TERESA – Deep underground, beneath the 18-foot steel wall that divides parts of the U.S. and Mexico border, the aquifer upon which both sides depend pays the barrier no mind.

The water is there for the taking, first come, first served.

The century-old international agreement that governs every drop of Rio Grande surface water doesn’t apply to the water that courses underground.

The binational aquifer – called the Mesilla Bolson on the U.S. side and Conejos Medanos on the Mexican side – is the freshwater source upon which southern New Mexico has anchored its hopes for its own economic future.

But a growing regional population and heavy groundwater pumping on both sides are leading to faster depletion than is sustainable long term, with no binational accords to govern use. 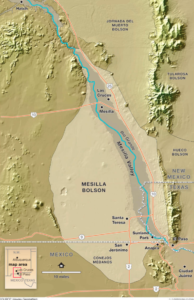 “The aquifer has quite a life to it,” said John Hawley, a Ph.D. hydrogeologist who has studied the Mesilla Bolson on both sides of the border for six decades. “But it’s something that I predicted based on behavior of wells throughout the area: that this wasn’t a permanent reservoir of freshwater.”

There are multiple takers on both sides of the border – cities, industry, farms. New Mexico has long been the largest user of the aquifer.

But what brought the lack of a groundwater agreement into full relief was a massive pipeline that went in just south of the border less than a decade ago. Overnight, it turned on demand roughly equal to what the second-largest city in New Mexico consumes on an annual basis.

Stephen Mumme, a political science professor at Colorado State University and expert on U.S.-Mexico water policy, said: “It’s a race to the bottom. There is no doubt about it.”

Charts of U.S. Geological Survey monitoring wells in southern Doña Ana County, near the border, show the depths needed to reach water: The trend lines plunge. The water table has dropped 30 to 50 feet over the past 10 years, according to Stacy Timmons, a hydrogeologist and aquifer mapping program manager at New Mexico Institute of Technology.

“That is basically indicating that there is a great deal of pumping going on that is removing groundwater,” she said. “With an extended drought that started in the early 2000s, we are seeing water levels that are precipitously dropping unlike anything we have ever seen since record keeping began.” 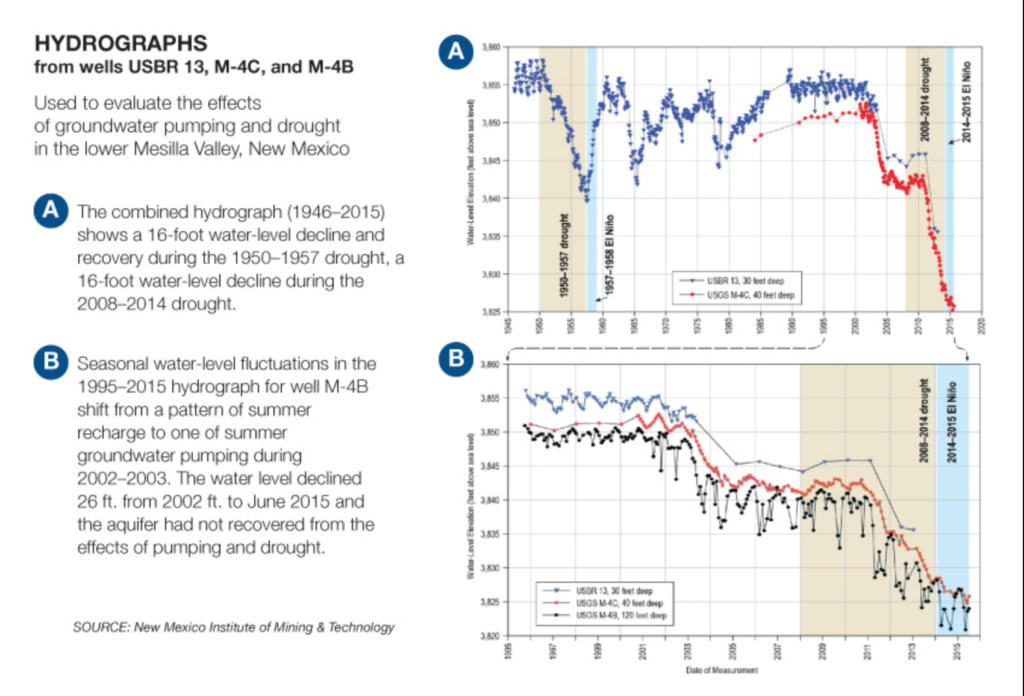 Mexican billionaire Carlos Slim’s Grupo Carso built the pipeline under contract with the Ciudad Juárez water authority. In 2010, the pipe began siphoning water from the aquifer to sate the city’s urban sprawl.

On the U.S. side, the demands on the aquifer are growing, too.

New Mexico’s industrial hub of Santa Teresa is counting on the Mesilla Bolson to supply the manufacturing and logistics businesses and subdivisions of single-family homes sprouting at the border. A little farther north, the population of Las Cruces, the state’s second-largest city, has climbed 37 percent since 2000 to more than 101,000 people, according to the U.S. Census. Meanwhile, driven by historically high pecan prices, Mesilla Valley farmers have been drawing down groundwater at unheard-of levels to feed water-hungry orchards.

Water managers say critical, if informal, cooperation on groundwater between the U.S. and Mexico has stagnated over the past decade. Talks are unlikely to resume with binational relations strained by the border wall debate and while Texas and New Mexico fight over groundwater in a case headed for the Supreme Court.

“When they turned that well field on (in Conejos Medanos), you could really feel the effect, an immediate response in the groundwater in the U.S. side in the Mesilla Bolson,” said Phil King, a civil engineer and water researcher at New Mexico State University. “We don’t have a groundwater treaty, so there is nothing to stop them.”

Few experts think water in the Mesilla Bolson is going to run out. As John Fleck, director of the water resources program at the University of New Mexico, explains in his book “Water Is for Fighting Over,” desert dwellers have proved themselves remarkably adaptable to water worries.

Rather than sheer scarcity, hydrogeologists say it’s more likely that water quality will deteriorate, salting up little by little – something that is already happening on the shallower, Mexican side of the aquifer.

Hawley predicts the same effect could be seen on the U.S. side in as few as 10 years – sooner than planners and developers may be ready for.

“We should be working on that aquifer together,” Hawley said, “to develop it jointly as a binational partnership.”

Below the riverbed, from points north of Las Cruces south across the Mexican border, the Mesilla Bolson holds an ancient deposit of water: an estimated 65 million acre feet of fresh and moderately brackish water, much of it dating to the Ice Age.

That amount of water is roughly 30 times the capacity of Elephant Butte Reservoir, the largest surface reservoir in the state. Underground, the water is held between grains of sand, silt and clay – like a wet sandbox. The Bolson’s freshwater supply represents perhaps only a tenth of the total resource, according to Hawley.

For many thousands of years the Mesilla Bolson has been replenished by rain, snowmelt and the river. But the intense pumping of the past 10 years, and a potential long-term shift toward a more arid climate, is threatening that historic recharge.

“In the last 15 years, there have been these large declines without recovery,” said Alex Rinehart, a hydrogeologist at the New Mexico Bureau of Geology and Mineral Resources. “The pumping has exceeded the rate of recharge from the river. The deeper the aquifer gets, the harder it is to recharge the aquifer.”

There is a silver lining this year: Heavy snowpack in the mountains of northern New Mexico were feeding the Rio Grande at levels not seen since 2008, raising hopes for freshwater recharge.

But NMSU’s King warns that the snowmelt isn’t behaving the way it used to; for one, it’s evaporating faster under hotter temperatures.

“We just haven’t seen the same kind of watershed dynamics that we saw historically,” King said. “This crazy weather we’re having here, you are seeing the snowmelt coming off earlier and faster.”

In August 1973, the International Boundary and Water Commission met in Mexico City to settle a dispute over salinity in river water that the U.S. delivered to Mexico. The agreement, known as “Minute 242,” identified the need for a treaty on shared groundwater basins.

“The U.S. and Mexico are in agreement that we need a groundwater agreement of some sort but that’s where it ends,” said Gilbert Anaya, chief of the environmental management division at the U.S. side of the IBWC. “It doesn’t say how we’re going to do it.”

Minute 242 is “the second-most important agreement on water we have with Mexico,” said Mumme, the CSU water policy expert, the first being the 1944 U.S.-Mexico treaty that governs deliveries of river water between the countries. A 1906 treaty was the original binational treaty on the Rio Grande.

For decades there have been on-and-off efforts to share information on binational aquifers, if not hammer out an accord on their use.

The latest such effort: Congress authorized the U.S.-Mexico Transboundary Aquifer Assessment Act in 2006 to encourage cooperation. Mexico agreed in 2009 to work on the project, which would gather data on binational aquifers.

The effort informally united local water managers and academics from southern New Mexico, West Texas and Ciudad Juárez to exchange data on water use. The team also discussed regional plans for urban growth, big agriculture, conservation and water-sharing ideas, but the effort was never fully funded and petered out.

Standing in the way of greater binational cooperation today are internal disagreements within the U.S., most notably New Mexico’s border with Texas. In Texas v. New Mexico – headed for review by the U.S. Supreme Court – the juggernaut to the east claims groundwater pumping in southern New Mexico is depleting the Rio Grande of water that belongs to Texas.

There are institutional barriers, too.

In Mexico, the federal government governs groundwater. In the U.S., every state has its own rules. New Mexico uses a complex system of water rights that have to be proven and consistently used. In Texas, landowners can claim rights to the water beneath their land.

“There ought to be more discussion between the U.S. and Mexico, and I think the problem is really the United States,” Mumme said. “It has always been the United States, because of our system of jealously guarded water rights. People don’t want to have their water utilization managed.”

“It’s been complicated,” said Manuel Herrera, technical director of the Ciudad Juárez water utility. “The three entities” – Mexico, New Mexico and Texas – “haven’t come to an agreement to do a project. It’s a problem we’re going to have to deal with at some point.”

Samantha Barncastle, legal counsel for the Elephant Butte Irrigation District, which manages surface water owed to southern New Mexico farmers and downstream users, put it this way: “It’s very easy to take the 30,000-foot view and say, ‘Well, we should be managing this across borders.’ But when you look at how within borders we can’t even manage it among ourselves, let alone bring in another nation, it’s sometimes easier to not kick the sleeping dog.”

Water use in the border region is not a zero-sum equation. The economic future of each side depends on the other.

“It’s a common source,” said Estevan López, former commissioner of the federal Bureau of Reclamation and former director of New Mexico’s Interstate Stream Commission. “If each side is going willy-nilly and turning a blind eye to the other, obviously that’s going to have impacts on that common source. It’s just not a good way of doing planning.”

“It is going to take a lot of local-level reaching-out, expressions of goodwill, trying to counteract trends in U.S.-Mexico relations,” Mumme said. “Does it throw a monkey wrench into local diplomacy along the border? Absolutely. How long that effect will last is hard to say.”

Oscar Ibáñez, a water researcher at the Autonomous University of Ciudad Juárez, said that, locally, “the political will is there.”

“On the border, all the decisions taken by (Washington and Mexico City) affect us,” Ibáñez said. “Border residents have to survive in the context of decisions made by the two countries – that’s not an option. But every time we cooperate, everything goes better.”